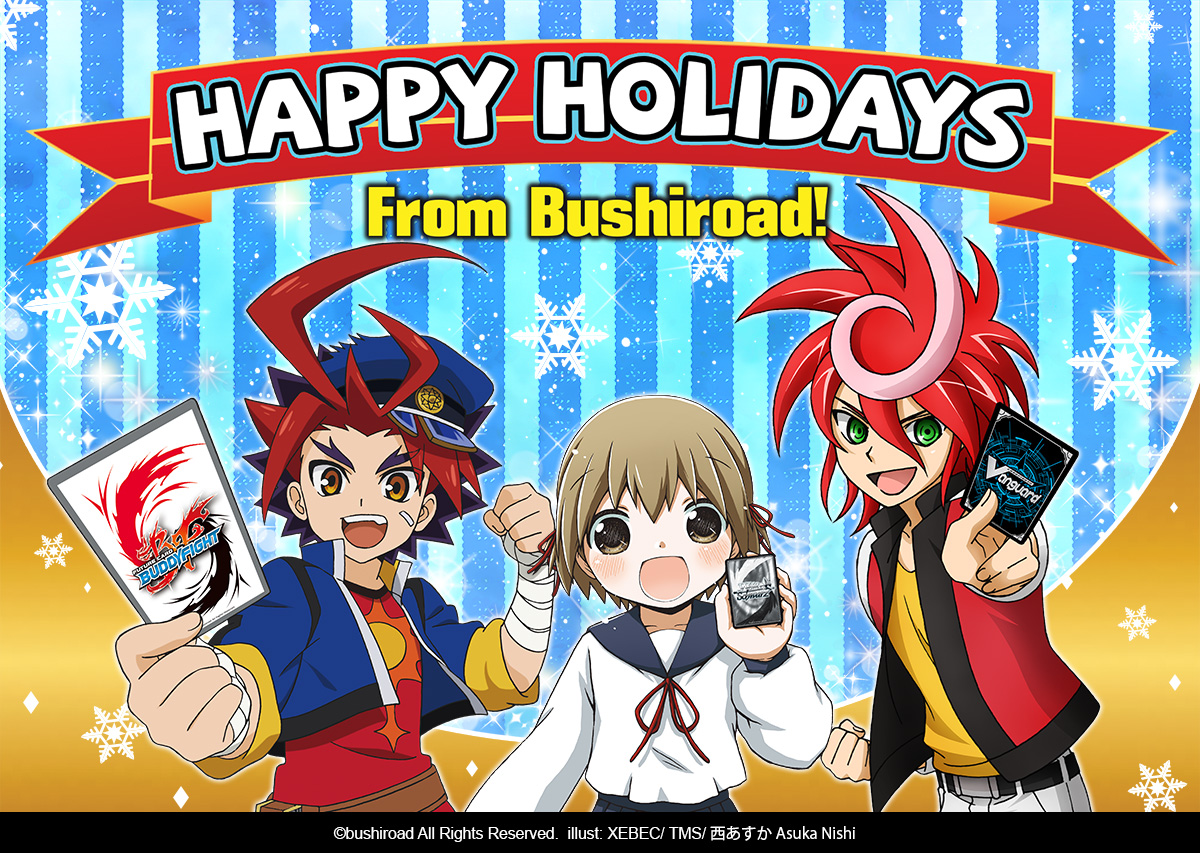 Last week, we started the #cfvanguard2016wish Twitter hastag, and we are glad to receive an overwhelming response! We have wishes related to cards, animation, events, merchandise etc., and many of you have submitted multiple wishes!

Let’s take a look at a few of them!

#cfvanguard2016wish I have 2 small wishes. 1: Is to meet Mr. Atsushi Abe (:. 2: Is for a new Shadow Paladin called Imagine Breaker Dragon.

Please let me get the Chrono Shindou plush toy that was released in October…. I’m begging… #cfvanguard2016wish

#cfvanguard2016wish Another one: More reprints and more bigger events like the BWCs.

#cfvanguard2016wish What is mines? Ok, it’s more like wishes, but to see the mini vanguard comic in English & more #toukenranbu cards!!

#cfvanguard2016wish For 2016, I hope to see a retrained Luquier break ride and support for the Coral ride chain.

Another #cfvanguard2016wish please also let Chrono x Tokoha happen..
and the other ships too..
Bushiroad don’t let them sink..

You may continue to hashtag #cfvanguard2016wish on Twitter to submit your wishes till the end of this year! Who knows one day your wish may come true ^.^

* Please allow JavaScript in your browser to display the Twitter Timeline. If you cannot see the timeline above, please refresh your browser.

Before we move on to the next topic, let’s have this week’s card preview! 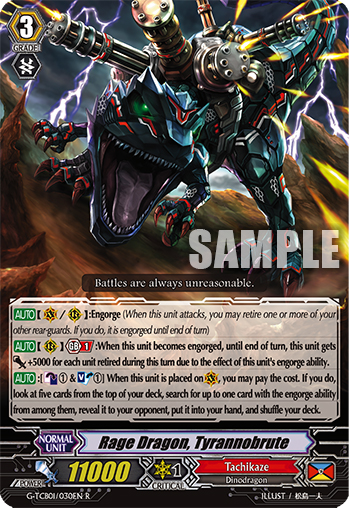 】:Engorge (When this unit attacks, you may retire one or more of your other rear-guards. If you do, it is engorged until end of turn)
【

:When this unit becomes engorged, until end of turn, this unit gets

+5000 for each unit retired during this turn due to the effect of this unit’s engorge ability.
:[

①]When this unit is placed on

, you may pay the cost. If you do, look at five cards from the top of your deck, search for up to one card with the engorge ability from among them, reveal it to your opponent, put it into your hand, and shuffle your deck.

We will continue to feature new cards in the next column. Do stay tuned!

Cardfight!! Vanguard G was first announced at the Tokyo WGP Event Stage on October 4, 2014. The stories in this series take place 3 years after the Legion Mate arc and follows the journey of one of the new vanguards, Chrono Shindou.

After a season spanning 48 episodes, I believe you are very familiar with the stories. The new characters Chrono Shindou, Tokoha Anjou and Shion Kiba will go on to form Team TRY3, and are now loved by many Cardfight!! Vanguard players. The new “mysterious” clan <<Gear Chronicle>> is also currently used by many players, and is one of the most popular clans during Bushiroad’s major events such as the Bushiroad Spring Fest and World Championship. 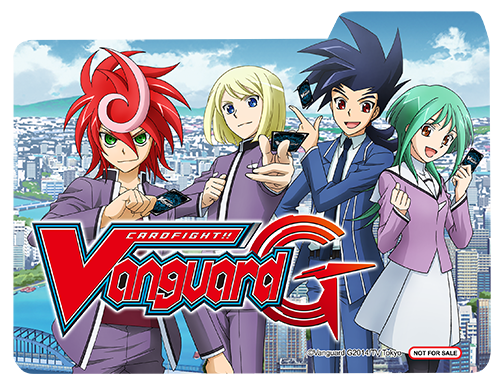 However, the main characters in previous seasons, including Aichi Sendou, Toshiki Kai and Ren Suzugamori, were mostly absent in Cardfight!! Vanguard G. Strictly speaking, they did appear for a very short while in the animation. I still remember how everyone was so excited when Ren was spotted passing by eating Takoyaki (Japanese octopus balls) in Episode 16.

In January, we also gave out the special Cardfight!! Vanguard G Deck Divider together with the January shop tournament PR card. Did you manage to get one?

While the Cardfight!! Vanguard G animation was airing on the official YouTube channel, the G series products made their debut on February 27, 2015, with 3 trial decks released simultaneously!

G Trial Deck Vol. 1 was released together with Vol. 2 Divine Swordsman of the Shiny Star featuring <<Royal Paladin>> clan, and Vol. 3 Flower Maiden of Purity featuring <<Neo Nectar>>. The release of these 3 G Trial Decks introduced the new Stride mechanics with the G units. The playmat has also been updated to include the G zone, where the G units are placed.

Did you enjoy the Stride mechanics in Cardfight!! Vanguard G? Let’s Generation Stride! 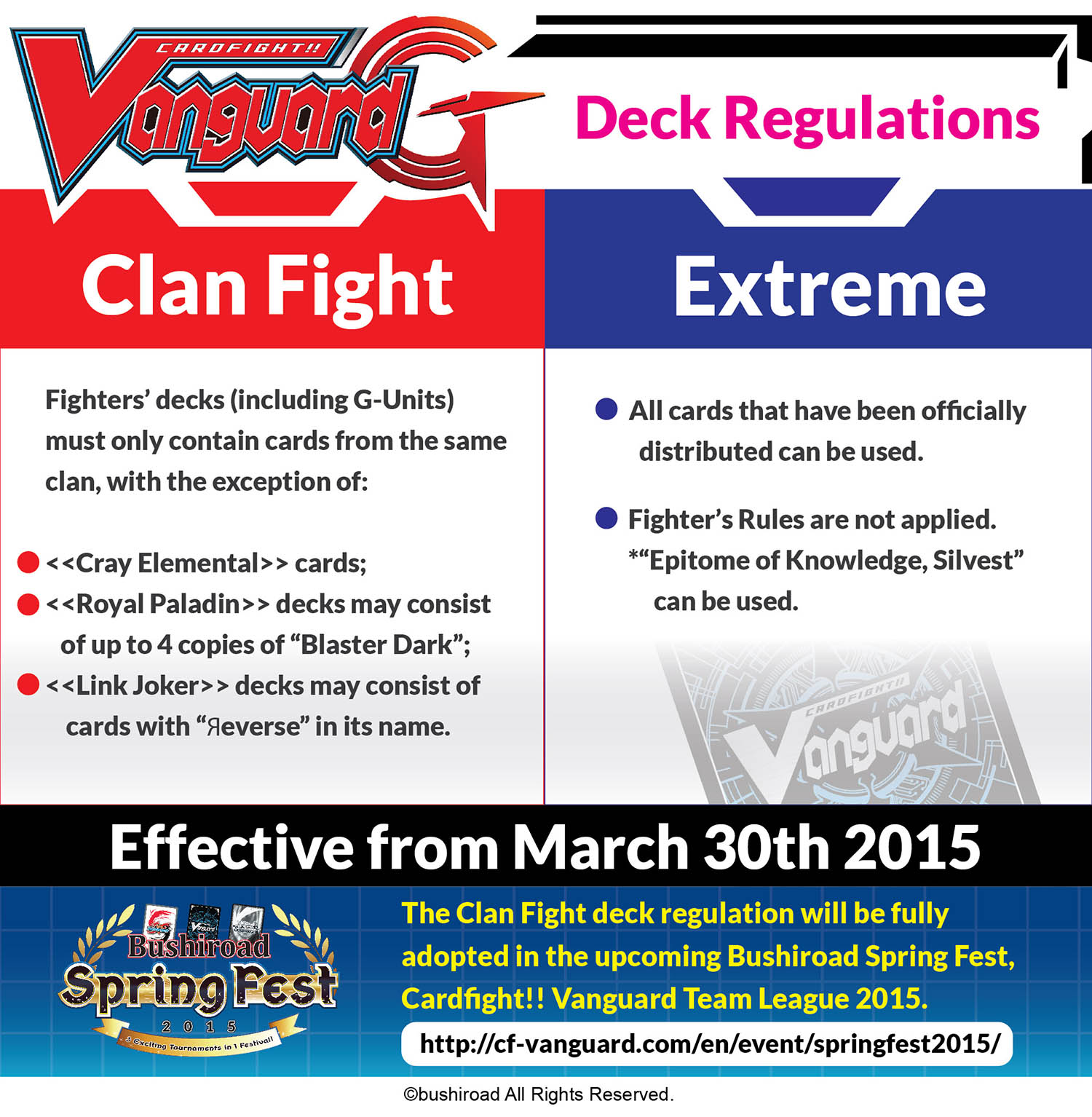 In March, the new deck regulations for Clan Fight and Extreme Fight are officially announced!

With effect from the end of March, the clan fight deck regulation has been applied to Bushiroad’s major tournaments, including the Bushiroad Spring Fest (BSF) 2015 which started in April, as well as the Bushiroad World Championship (BWC) 2015 which began in August. Tournament shops have also widely adopted the clan fight and extreme fight regulations for their monthly shop tournaments.

Under the clan fight regulation, all the cards should be of the same clan, with the exception of <<Cray Elemental>> cards, and some special regulations with <<Royal Paladin>> and <<Link Joker>> clans. For extreme fight, all cards that were officially released may be used to form a deck.

Cardfight!! Vanguard Team League, one of the Bushiroad Spring Fest 2015 (BSF 2015) events, officially began in April, with Mexico being its first location! 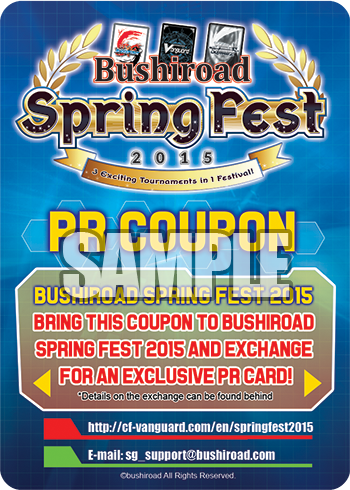 In fact, BSF 2015 already kick started the event with the PR Coupon Campaign back in March. Players who participated in the March and April Cardfight!! Vanguard shop tournaments were issued a PR Coupon. The coupons could be exchanged with a special PR card at BSF 2015 events. The PR Coupon Campaign was a hit amongst players all over the world! That’s why we will be continuing the campaign in 2016!

BSF 2015 was held at 16 locations across 3 continents: Asia-Oceania, Europe and North/Latin America. As the name “Team League” suggests, players were required to form teams of 3 in order to participate and team members had to use clans different from one another. BSF 2015 concluded successfully in July and we are thankful for everyone who joined us! 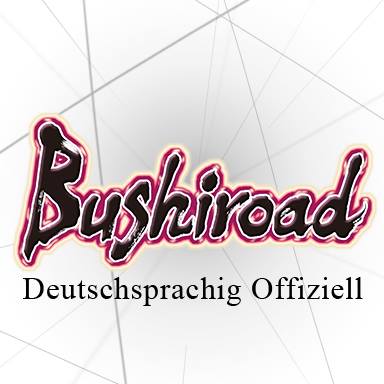 Our official Facebook page in German: Bushiroad Deutschsprachig Offiziell launched on May 4, 2015! It features all Bushiroad English edition card games and events in the German language.

Also, don’t forget that we partnered with Ynaris to create a Facebook page bringing Bushiroad news and updates to French speaking players! 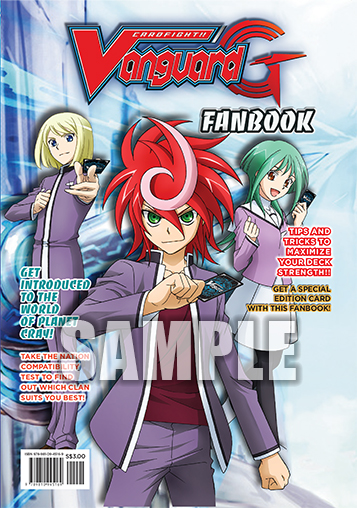 In June, we made something special for our fans: The Cardfight!! Vanguard G / Future Card Buddyfight 100 Fanbook!

The fanbook was a joint production featuring both Cardfight!! Vanguard G and Future Card Buddyfight 100. It contains 32 pages of full color illustrations of characters and monsters from both games. It was initially sold at CharaExpo 2015 in Singapore, and then at Anime Expo 2015 in the US. Thereafter, the fanbook was available worldwide.

There are a number of useful sections in this fanbook. It consists of introductory pages for beginners, as well as advice for veteran players. There are many fun sections too! For example, you can test which clan suits you best or attempt a mini quiz to test your Cardfight!! Vanguard knowledge after reading the fanbook. If you don’t have one yet, check out your local shop to get your copy!

We will continue this topic in the next column on January 1st, 2016. Do remember to come back to Cardfighter’s Column next Friday!

Last but not least, we would like you to help us out on a short survey regarding card shops! Please find the question below:

Also, if you have not voted your favorite clans, click the banner below! Most popular clans will be made into exclusive apparel at Bushiroad Online Shop!

Thank you for very much for your time, and let’s meet again next Friday at Cardfighter’s Column!