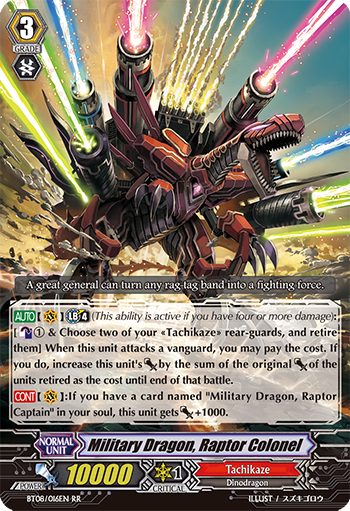 Military Dragon, Raptor Colonel
Normal Unit
Tachikaze
Dinodragon
Dragon Empire
Grade 3
Power 10000
Critical 1
Shield -
Twin Drive!!
-
[AUTO](VC)[Limit-Break 4](This ability is active if you have four or more damage):[Counter-Blast 1 & Choose two of your &ltTachikaze> rear-guards, and retire them] When this unit attacks a vanguard, you may pay the cost. If you do, increase this unit's [Power] by the sum of the original [Power] of the units retired as the cost until end of that battle.
[CONT](VC):If you have a card named "Military Dragon, Raptor Captain" in your soul, this unit gets [Power] +1000.
A great general can turn any rag-tag band into a fighting force.
G-Regulation
BT08/016EN
RR
スズキゴロウ
Prev
Return to Search Results
Next