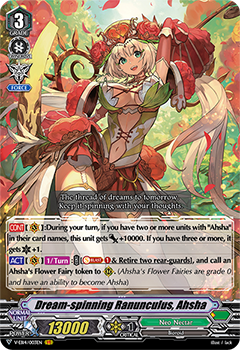 Dream-spinning Ranunculus, Ahsha
Normal Unit
Neo Nectar
Bioroid
Zoo
Grade 3
Power 13000
Critical 1
Shield -
Twin Drive
-
[CONT](VC):During your turn, if you have two or more units with "Ahsha" in their card names, this unit gets [Power] +10000. If you have three or more, it gets [Critical] +1.
[ACT](VC)[1/turn]:[COST][Soul-Blast 1 & Retire two rear-guards], and call an Ahsha's Flower Fairy token to (RC). (Ahsha's Flower Fairies are grade 0 and have an ability to become Ahsha)
The thread of dreams to tomorrow. Keep it spinning with your thoughts.
V-Premium
V-EB14/003EN
VR
lack
Prev
Next

[Dream-spinning Ranunculus, Ahsha] is used in the follow Deck Recipes