Chapter 2: The Witch of Pandering 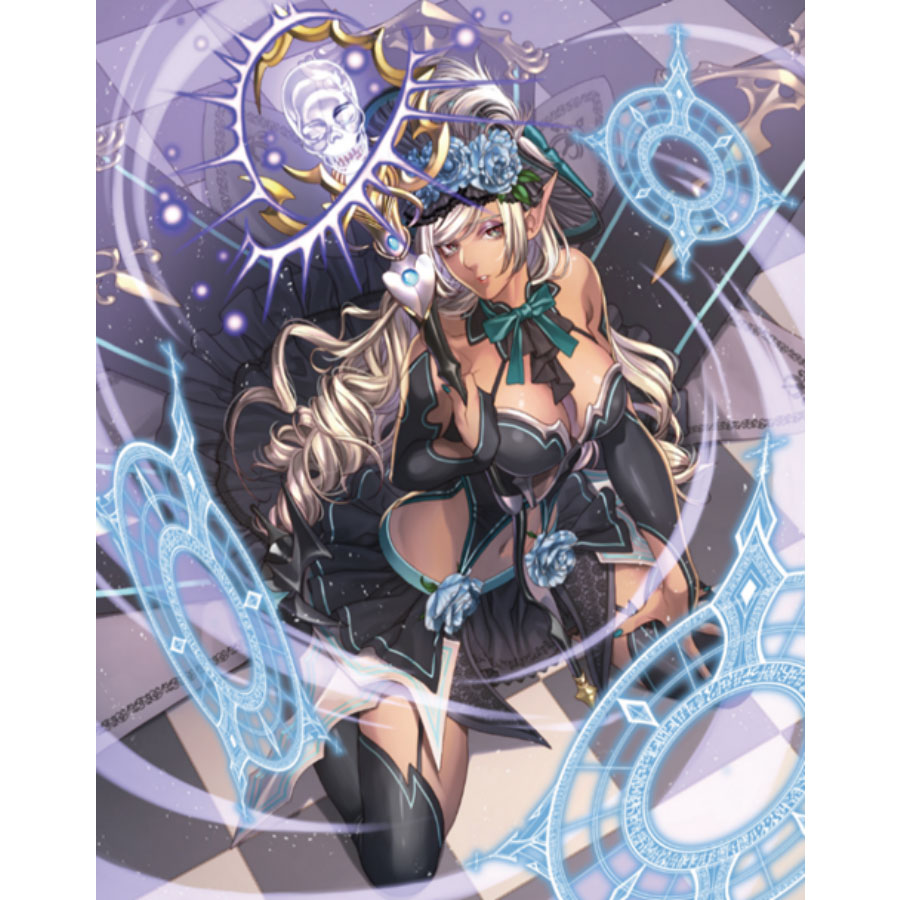 A woman tapped the tip of a wand, capped with a crystal skull, on the table in front of her. Her pointed ears trembled, and her eyes had a glint in them, almost as if she had seen countless centuries go by.

“Bring in the next customer.”

A girl who had been waiting by the door responded to the woman’s voice by bowing and leaving the room.

After a few moments she returned with a well-dressed gentleman.

The gentleman fidgeted and looked around at the opulent interior of the witch’s room. Brunner’s outfit was so revealing, and she looked so attractive, he was having trouble looking directly at her.

As he averted his gaze, he spotted a vibrant tapestry on the wall, depicting an ancient legend.

A sleeping dragon, a dead monk’s hermitage, putting your very soul on the line… The intricately intertwined patterns and the ancient stories that they told were completely beyond the comprehension of the mayor, a man very much living in the modern age.

“The amount you’ve given me to bless your fields seems to be a little less than last year. I’m not running a charity here.”

The mayor began to sweat.

Brunner snorted at him. She began to speak in a low, ominous voice.

“Please… Our town has been a patron of yours for many years now, isn’t there anything that you…” pleaded the mayor.

“Your town is going to have a bad harvest this year. I shall curse you with a spring of ceaseless rain, a summer of punishing heat,
and a fall of endless locust swarms.”

“Silence! You are the one who dared anger a witch. I suggest you leave now, unless you want to be burned to a crisp right there in your cheap, garish clothes.”

“Firine, our customer is leaving!”

“That was some bad business. I guess it might be time to leave this area… Hey, stand over there.”

Brunner pointed at the girl known as Firine, who faced her from across the table.

“You know they call me the ‘Witch of Pandering.’ It’s not good for my reputation to have a glum, skinny thing like you as an assistant. I keep telling you to eat. What will my sisters think when they see you?”

“I guess I just don’t gain weight,” the girl responded in a muffled voice.

“I’ve learned to sew. And I’m good with the animals.”

“In the two years since I took you from your family all you’ve done is tend the cows and sew. I was 11 when I struck out on my own. I had a big fight with my teacher.”

“You know where I’m going with this, don’t you? A witch’s assistant is not a job you can keep if you do not have a desire to learn magic. You can leave at any time.”

Brunner’s tone was calm, despite her harsh words.

“No. Please let me stay here, Aun— Madam Brunner. I’ll learn some magic if I have to.”

Brunner’s face turned stern for just a moment, but then sighed and sank deeper into her chair.

“I shall prepare some tea for you, Madam Brunner,” chuckled Firine.

The mayor would no doubt have been shocked at the cozy scene that was unfolding in the witch’s hut.

Two heavy objects fell to the ground. A hole had appeared in the sky, but quickly closed and disappeared.

A short while later, Gaddy, the forthright blacksmith’s son, showed his dark-haired head.

“Pfft! Pfft! What the hell was that?”

Next, the silver-haired Abban, the son of a bookstore owner, appeared.

As they struggled their way out of the hay, Abban checked his belongings.

The fluorescent lamp and his short sword were just the same as when he left that morning for the ruins below Sacred Albion.

No, he now had a necklace in his hand, one with a red gemstone in a blue and white setting.

“It was a draw, no? We said whoever touched it first would be the winner.”

Gaddy had finally made his way out of the hay and came over to look at the necklace. He had his hammer-ax in his hand.

Abban nodded, put what their pursuers had called “the light” around his neck, and pulled his collar up to hide it. His father had taught him that greed can change a man.

“It’s a place that must be connected to the hole under the town, so we can’t be too far away…”

As they left the barn, they heard the clang of a bucket falling down.

There was a young girl who stood trembling at the sight of the two boys. There was milk spilled all around her feet.

Gaddy was quick to realize how bad it looked, and so hid his hammer-ax behind his back.

The girl turned and ran back to the main house.

What could they do? Abban shrugged.

“Try knocking on the door. I’m sure we can explain everything.”

“I don’t know what you’re trying to accomplish, but maybe I should turn you into little dolls?”

An invisible magic rope tied up the two boys. Brunner sat down by them.

“Still, I have to admit you have a lot of nerve breaking into Madam Brunner’s residence armed as you are.”

“Where are we?” asked Abban.

“Just by looking, this doesn’t seem to be Sacred Albion,” said Gaddy.

“Longhorn Forest… Just over the border of the Dragon Empire,” Firine answered in a quiet voice.

“Huh? We’ve been transported halfway across the country!?” exclaimed Gaddy.

“Hey, you will talk when I say you can talk! That goes for you too, Firine!”

Firine shrank back into the corner as her mistress continued to rant and rave.

“So, you’re telling me you just traveled an enormous distance through a tear in the space-time continuum? And this necklace has the power to give you visions of a battle from long ago involving legendary figures, and knowledge of those battles? A likely story!”

“I’m sure a magic user like yourself knows more about such things than we do. Still, if you wouldn’t mind returning to us that which is ours,” asked Abban.

“Come on, lady, just give us a break,” added Gaddy.

“You will address her as Madam Brunner!”

The two boys were good-natured at heart, and so were able to spend the rest of the afternoon with Brunner without incurring any more of her wrath.

“I’m so sorry. My mistress is quick to anger and has a… way with words, but she’s actually a good person.”

Firine apologized to the boys as she gave a spoonful of soup to each of them for dinner, even as they were tied to a post in the barn.

“I was just thinking the same thing.”

Abban ignored his friend’s jibes and continued to look straight into Firine’s eyes.

“All we want is our necklace back. We would be very grateful if you could arrange that for us.”
“I’m sorry. I placed it in the study. Madam Brunner wanted to study it…”

Abban had noticed a certain… discomfort between Firine and Brunner from the moment they arrived.

“Are you her daughter, Firine?” Abban asked suddenly.

“No. She’s my mother’s elder sister, though she hates it when I call her Aunty. After my parents died in the plague, she took me in and raised me…”

“I see. She really must be kind after all.”

“But she won’t give our necklace back.”

“Right. Going back to the original discussion.”

Firine set the dishes down and reached for something inside her apron.

“I was supposed to put it in the study for Madam Brunner to look at later, but I became so curious I just had to bring it with me. I’ve always been curious.”

“Ah, but I don’t know how to untie the magical rope, so for now you’ll just have to look at it.”

Gaddy and Abban shouted in unison.

“That soup was delicious!”

“And you must be very brave to take the necklace away from your scary mistress’s study.”

Firine smiled, and her cheeks flushed slightly. Her smile was warm enough to light up the dark barn.

“Oh, but none of this will matter if we get turned into dolls tomorrow.”

Gaddy looked up at the night sky, filled with moons and planets, and sighed.

“I wonder. Firine, why don’t you try that necklace on?”

Firine looked shocked at the suggestion.

“It’ll suit you. My father taught me that people change when they’re around beautiful gems like this one.”

Gaddy started reciting a poem. It was actually a line from their school’s anthem, but…

The girl was not accustomed to putting on jewelry like this. As she put it around her neck the red jewel started to glow, enhancing Firine’s beauty. She started to take on the dignity and brightness of a princess.

Once again, they saw the battle between the deformed figures in the wilderness.

The black knight wielding a spear was wreathed in black flames. He wasn’t getting damaged, he was transforming.

As the flames disappeared the figure of a black knight wielding a black sword appeared in their place.

Firine’s disembodied voice rang out, reaching the disembodied spirits of Abban and Gaddy. 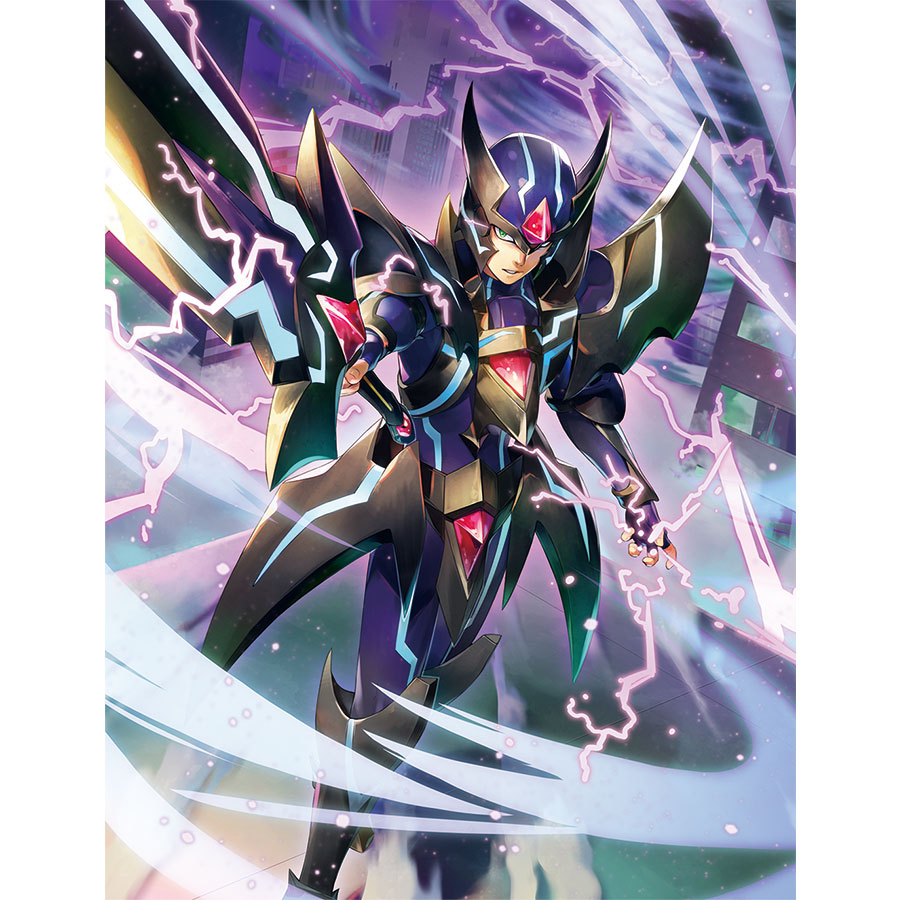 “Firine, you know what’s going on too?”

The Dragon Knight, Nehalem, who had until that point been using the combined strength of himself and his dragon to dominate the battlefield, was being slowly pushed back by Blaster Dark, eventually succumbing to the black sword.

Somehow the three observers knew that this was the battle to determine who of the Kagero and the Shadow Paladins were the strongest. Information that they should have no way of knowing came pouring out of the necklace.

Abban noticed the terrain of the battlefield.

There was a pulsating white light at the end of the snow-capped mountains. It was almost as if…

The two boys ‘looked’ back down at the battle.

Scarlet flames erupted from the ground.

A great apocalyptic fire that would consume the whole planet! 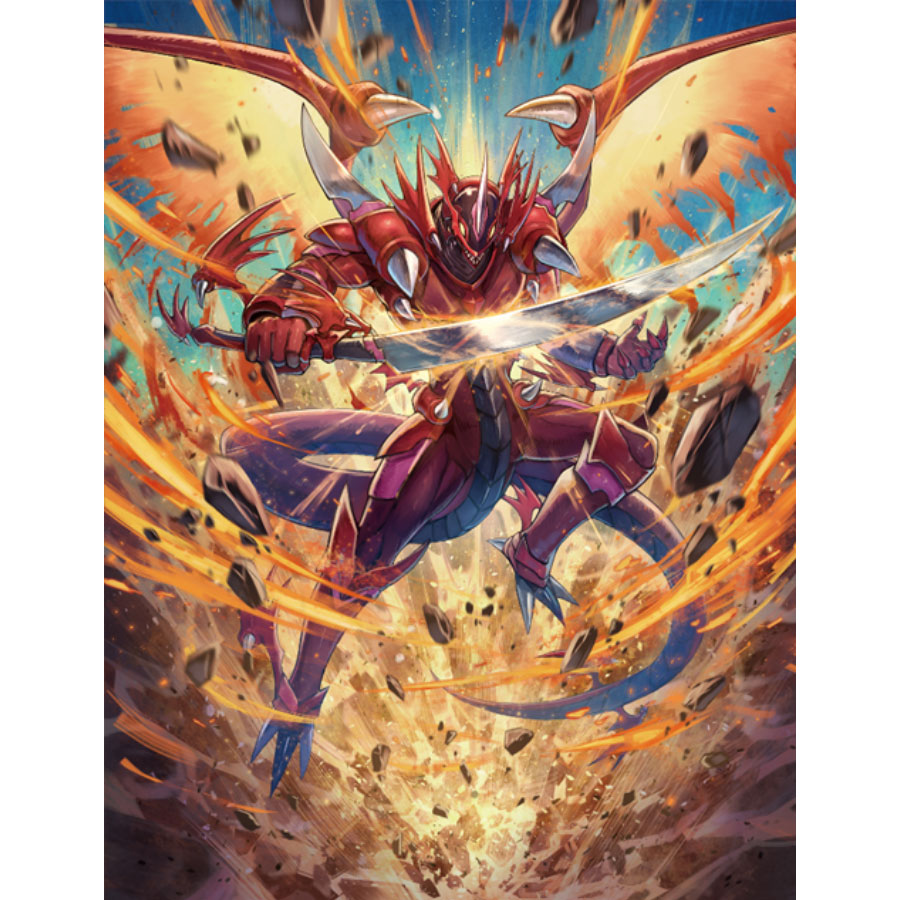