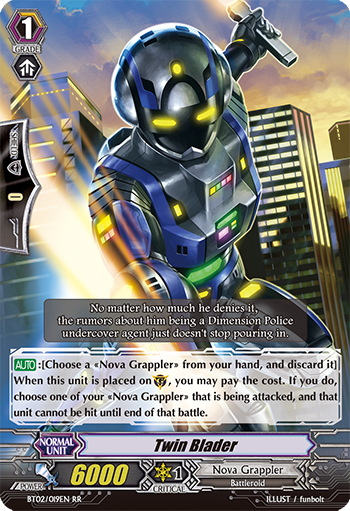 Twin Blader
Normal Unit
Nova Grappler
Battleroid
Star Gate
Grade 1
Power 6000
Critical 1
Shield 0
Boost
-
[CONT]:Sentinel (You may only have up to four cards with "[CONT]:Sentinel" in a deck.)
[AUTO]:[Choose a <Nova Grappler> from your hand, and discard it] When this unit is placed on (GC), you may pay the cost. If you do, choose one of your <Nova Grappler> that is being attacked, and that unit cannot be hit until end of that battle.
No matter how much he denies it, the rumors about him being a Dimension Police undercover agent just doesn't stop pouring in.
G-Regulation
BT02/019EN
RR
funbolt
Prev
Next

[Twin Blader] is used in the follow Deck Recipes