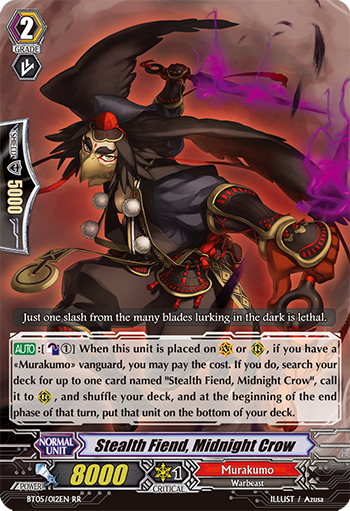 Stealth Fiend, Midnight Crow
Normal Unit
Murakumo
Warbeast
Dragon Empire
Grade 2
Power 8000
Critical 1
Shield 5000
Intercept
-
[AUTO]:[Counter-Blast 1] When this unit is placed on (VC) or (RC), if you have a &ltMurakumo> vanguard, you may pay the cost. If you do, search your deck for up to one card named
Stealth Fiend, Midnight Crow
, call it to (RC), and shuffle your deck, and at the beginning of the end phase of that turn, put that unit on the bottom of your deck.
Just one slash from the many blades lurking in the dark is lethal.
G-Regulation
BT05/012EN
RR
Azusa
Prev
Return to Search Results
Next