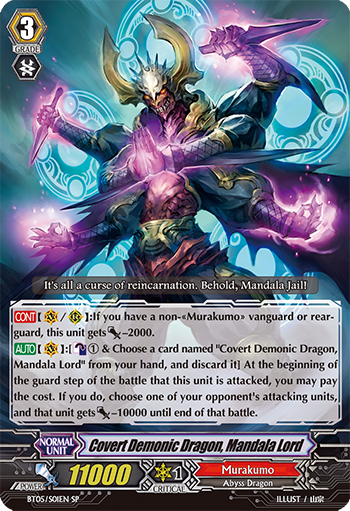 Covert Demonic Dragon, Mandala Lord
Normal Unit
Murakumo
Abyss Dragon
Dragon Empire
Grade 3
Power 11000
Critical 1
Shield -
Twin Drive!!
-
[CONT](VC/RC):If you have a non-&ltMurakumo> vanguard or rear-guard, this unit gets [Power] -2000.
[AUTO](VC):[Counter-Blast 1 & Choose a card named
Covert Demonic Dragon, Mandala Lord
from your hand, and discard it] At the beginning of the guard step of the battle that this unit is attacked, you may pay the cost. If you do, choose one of your opponent's attacking units, and that unit gets [Power] -10000 until end of that battle.
It's all a curse of reincarnation. Behold, Mandala Jail!
G-Regulation
BT05/S01EN
RRR
山宗
Prev
Next