[BT12]Binding Force of the Black Rings 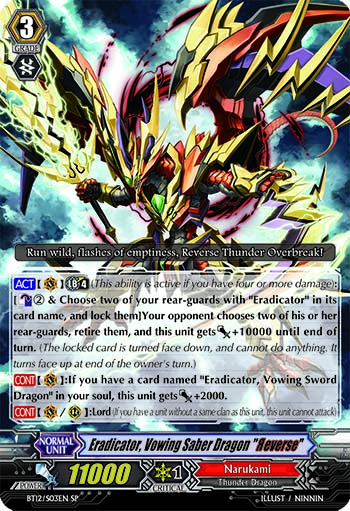 Eradicator, Vowing Saber Dragon "Яeverse"
Normal Unit
Narukami
Thunder Dragon
Dragon Empire
Grade 3
Power 11000
Critical 1
Shield -
Twin Drive!!
-
[ACT](VC)[Limit-Break 4](This ability is active if you have four or more damage):[Counter-Blast 2 & Choose two of your rear-guards with "Eradicator" in its card name, and lock them]Your opponent chooses two of his or her rear-guards, retire them, and this unit gets [Power] +10000 until end of turn. (The locked card is turned face down, and cannot do anything. It turns face up at end of the owner's turn.)
[CONT](VC):If you have a card named "Eradicator, Vowing Sword Dragon" in your soul, this unit gets [Power] +2000.
[CONT](VC/RC):Lord (If you have a unit without a same clan as this unit, this unit cannot attack)
Run wild, flashes of emptiness, Reverse Thunder Overbreak!
G-Regulation
BT12/S03EN
SP
NINNIN
Prev
Next