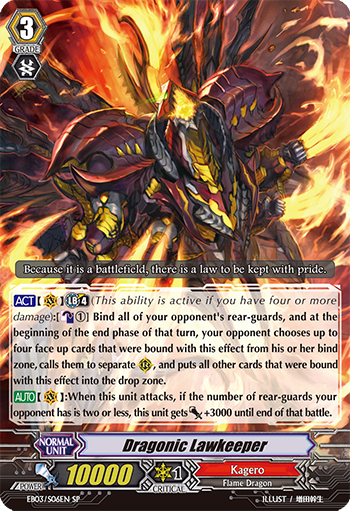 Dragonic Lawkeeper
Normal Unit
Kagero
Flame Dragon
Dragon Empire
Grade 3
Power 10000
Critical 1
Shield -
Twin Drive!!
-
[ACT](VC)[Limit-Break 4](This ability is active if you have four or more damage):[Counter-Blast 1] Bind all of your opponent's rear-guards, and at the beginning of the end phase of that turn, your opponent chooses up to four face up cards that were bound with this effect from his or her bind zone, calls them to separate (RC), and puts all other cards that were bound with this effect into the drop zone.
[AUTO](VC): When this unit attacks, if the number of rear-guards your opponent has is two or less, this unit gets [Power] +3000 until end of that battle.
Because it is a battlefield, there is a law to be kept with pride.
G-Regulation
EB03/S06EN
SP
増田幹生
Prev
Next