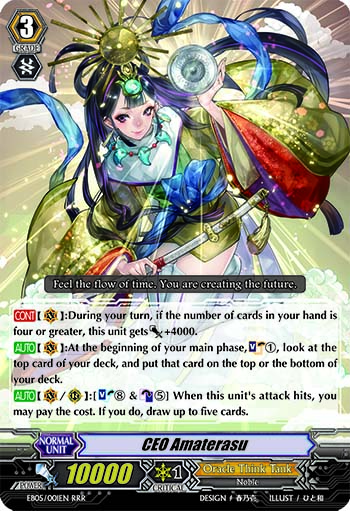 CEO Amaterasu
Normal Unit
Oracle Think Tank
Noble
United Sanctuary
Grade 3
Power 10000
Critical 1
Shield -
Twin Drive!!
-
[CONT](VC):During your turn, if the number of cards in your hand is four or greater, this unit gets [Power] +4000.
[AUTO](VC):At the beginning of your main phase, [Soul-Charge 1], look at the top card of your deck, and put that card on the top or the bottom of your deck.
[AUTO](VC/RC):[Soul-Blast 8 & Counter-Blast 5] When this unit's attack hits, you may pay the cost. If you do, draw up to five cards.
Feel the flow of time. You are creating the future.
G-Regulation
EB05/001EN
RRR
DESIGN: 春乃壱 ILLUST: ひと和
Prev
Next

[CEO Amaterasu] is used in the follow Deck Recipes