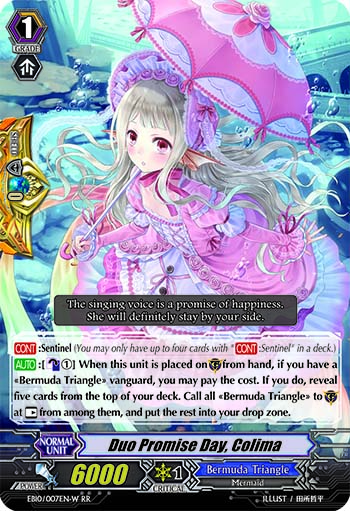 Duo Promise Day, Colima
Normal Unit
Bermuda Triangle
Mermaid
Magallanica
Grade 1
Power 6000
Critical 1
Shield 0
Boost
-
[CONT]:Sentinel (You may only have up to four cards with "[CONT]:Sentinel" in a deck.)
[AUTO]:[Counter-Blast 1] When this unit is placed on (GC) from hand, if you have a &ltBermuda Triangle> vanguard, you may pay the cost. If you do, reveal five cards from the top of your deck. Call all &ltBermuda Triangle> to (GC) at [Rest] from among them, and put the rest into your drop zone.
The singing voice is a promise of happiness. She will definitely stay by your side.
G-Regulation
EB10/007EN-W
RR
田所哲平
Prev
Return to Search Results
Next