[G-BT04] Soul Strike Against The Supreme 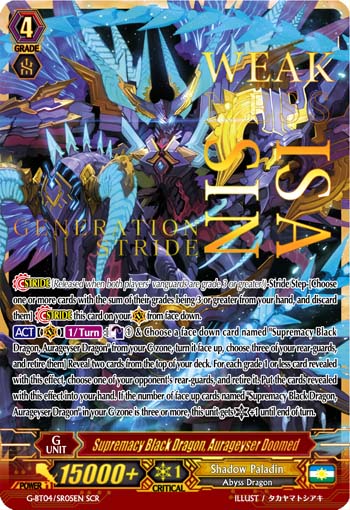 Supremacy Black Dragon, Aurageyser Doomed
G Unit
Shadow Paladin
Abyss Dragon
United Sanctuary
Grade 4
Power 15000+
Critical 1
Shield -
Triple Drive!!!
-
[Stride](Released when both players' vanguards are grade 3 or greater!)-Stride Step-[Choose one or more cards with the sum of their grades being 3 or greater from your hand, and discard them] [Stride] this card on your (VC) from face down.
[ACT](VC)[1/turn]:[Counter-Blast 1 & Choose a face down card named "Supremacy Black Dragon, Aurageyser Dragon" from your G zone, turn it face up, choose three of your rear-guards, and retire them] Reveal two cards from the top of your deck. For each grade 1 or less card revealed with this effect, choose one of your opponent's rear-guards, and retire it. Put the cards revealed with this effect into your hand. If the number of face up cards named "Supremacy Black Dragon, Aurageyser Dragon" in your G zone is three or more, this unit gets [Critical] +1 until end of turn.
-
G-Regulation
G-BT04/SR05EN
SCR
タカヤマトシアキ
Prev
Next