Diabolos Boys, Eden
If you are in "Final Rush", this unit gets +5000 Power! If this unit stood from a card effect, it gets an additional critical!
When this unit's attack hits, retire one of your opponent's rear-guards! Restand this unit with the ability of "Diabolos, "Violence" Bruce", and deliver a powerful blow with the extra critical!
The on-hit ability can be used even when you are not in "Final Rush", so this will be useful even from the beginning! 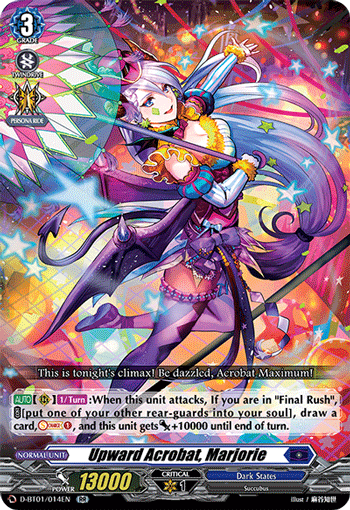 Upward Acrobat, Marjorie
When this unit attacks, if you are in "Final Rush", you can put another rear-guard into your soul, draw a card, Soul-Charge 1, and get +10000 Power!
If you used its ability and Persona Rode, it can become a powerful attacker of 33000 Power! Restand this unit with the ability of "Diabolos, "Violence" Bruce"! At the same time, it can provide fuel for Bruce to use the ability again in your next turn as it will gather 2 souls at a time!