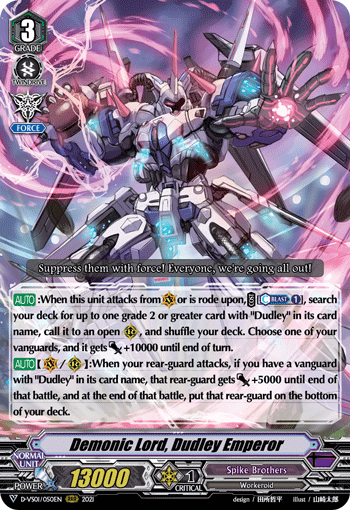 Demonic Lord, Dudley Emperor
When it attacks or is rode upon, Counter-Blast 1 to call a grade 2 or greater "Dudley" unit to an open rear-guard circle! In addition, your vanguard gets +10000 Power! When your rear-guard attacks, if you have a "Dudley" vanguard, that rear-guard gets +5000 Power, and at the end of that battle, put that rear-guard on the bottom of your deck! This ability that strengthens rear-guards is effective when this unit itself is a rear-guard, allowing you to execute powerful attacks by calling multiple copies of "Demonic Lord, Dudley Emperor"! 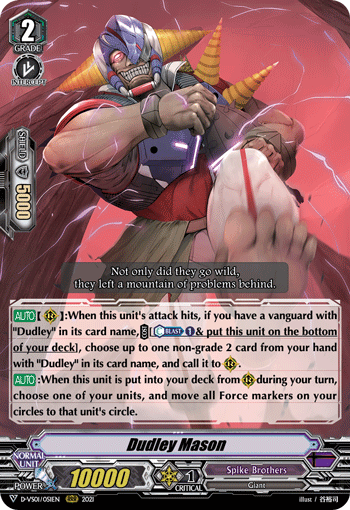 Dudley Mason
When its attack hits, if you have a "Dudley" vanguard, Counter-Blast 1 and place this unit on the bottom of the deck to call a non-grade 2 "Dudley" rear-guard from your hand! When this unit is put into the deck from a rear-guard circle, move all Force markers to another circle! A unit that allows you to call another unit or move Force markers! You can also move the Force marker even if this unit is placed on the bottom of the deck with "Dudley Emperor's" ability! 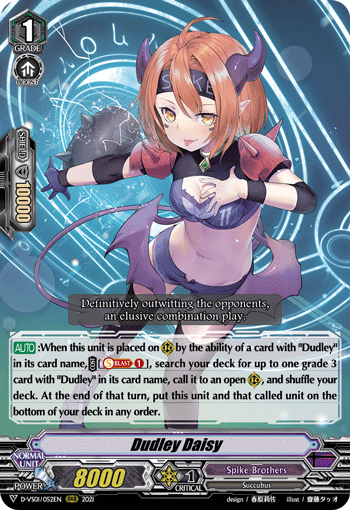 Dudley Daisy
When placed by the ability of a "Dudley" unit, Soul-Blast 1 and you can call a grade 3 "Dudley" unit from the deck to an open rear-guard circle! At the end of that turn, put this unit and that called unit on the bottom of your deck in any order! Call "Demonic Lord, Dudley Emperor" to boost the power of your rear-guards!