Cursed Mage that Sleeps within the Abyss

A Granblue deck that retires and locks the mass amounts of units that are revived to activate various abilities. Perform multiple attacks by superior riding the vanguard! 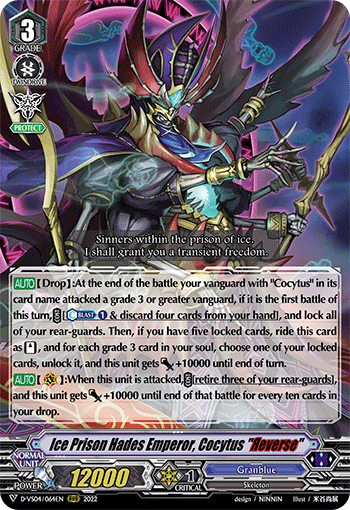 Ice Prison Hades Emperor, Cocytus "Яeverse"
At the end of the battle that your Cocytus vanguard attacks a grade 3 or greater vanguard, if this card is in your drop and it is the first battle of this turn, you can Counter-Blast 1 and discard four cards from your hand to lock all of your rear-guards. If you have five locked cards, you can ride this card from drop and for each grade 3 card in your soul, you can unlock one of your locked cards and this unit gets +10000 Power! When attacked, you can retire three rear-guards and this unit gets +10000 Power for every ten cards in your drop! While this card is in drop, if you have five rear-guards, you can perform two vanguard attacks! Although four rear-guards will be locked at first, as you increase the amount of grade 3 cards in your soul, the amount of rear-guards that will be unlocked increases, not to mention that your vanguard will also become more powerful too! Endure your opponent's attacks with this unit's defensive ability and aim to finish your opponent on the fourth or fifth turn! 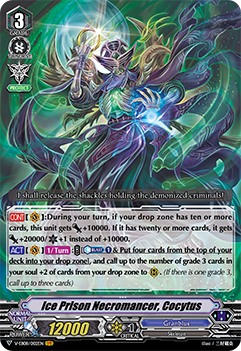 Ice Prison Necromancer, Cocytus
During your turn, if there are ten or more cards in your drop zone, this unit gets +10000 Power! If there are twenty or more, it gets +20000 Power and an additional critical! By Counter-Blasting 1 and placing four cards from the top of your deck to drop, you can call from your drop equal to the amount of grade 3 cards in your soul +2! This is a unit that can increase the amount of cards in your drop while calling multiple units! First, ride this unit, and then aim to superior ride "Ice Prison Hades Emperor, Cocytus "Яeverse""! As this unit becomes more powerful if you have more grade 3 cards in soul. If this card is in your drop, you can add this card to hand with the ability of "Greed Shade" so that you can ride it once again on the next turn after you superior ride!