The Withered and Fallen Lily Flower

A Neo Nectar deck that focuses on calling Musketeer units for battle. Make use of Cecilia units called from the deck and aim for multiple attacks! Depending on the situation, in exchange for having fewer attacks, you can even superior ride for multiple vanguard attacks! 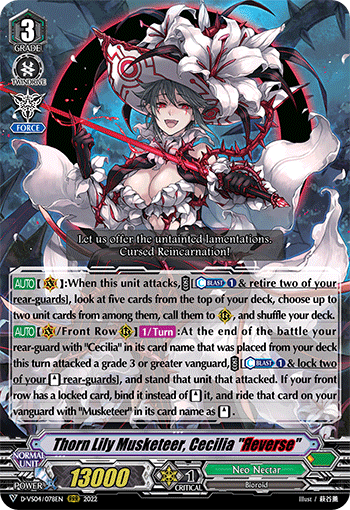 Thorn Lily Musketeer, Cecilia "Яeverse"
When attacking, by paying Counter-Blast 1 and retiring two rear-guards, you can look at the top five cards of your deck and call up to two units! During the turn a Cecilia unit is placed on your rear-guard circle, at the end of the battle that a grade 3 or greater vanguard attacked, by paying the cost of Counter-Blast 1 and locking 2 standing rear-guards, you can stand that Cecilia! And if you have a locked card in your front row, you can ride that Cecilia on top of your Musketeer vanguard instead! As you can call rear-guards during the battle phase, you can aim for consecutive attacks! Also, if you can call Cecilia from the deck, you can perform even more attacks! 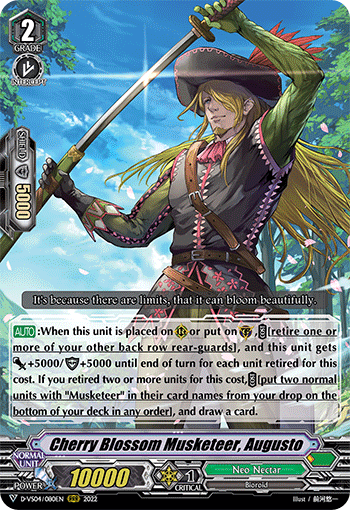 Cherry Blossom Musketeer, Augusto
When placed on the rear-guard or guardian circle, by retiring one or more back row rear-guard, this unit gets +5000 Power and +5000 Shield for each unit retired! And if two or more rear-guards are retired, you can put two normal Musketeer units from your drop on the bottom of the deck in any order to draw a card! A unit that is capable of retiring its allies and turning them into its own power! As this unit increase both power and shield, it can be used both for attacking and defending!