The Dark King Of The Jungle

A Great Nature deck that uses "School Punisher, Leo-pald "Яeverse"" as a trump card. With the "lottery" ability, power up your allies to their limits and bare fangs at all those who oppose you! 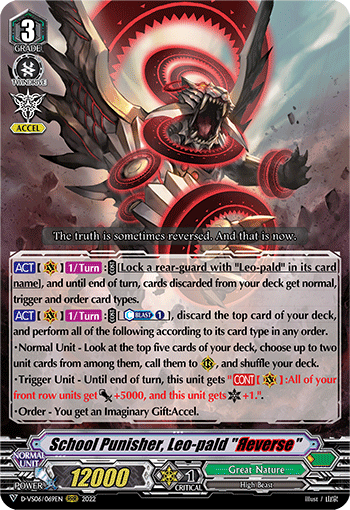 School Punisher, Leo-pald "Яeverse"
Lock a rear-guard "Leo-pald" and during that turn, cards that are discarded from the deck get normal, trigger, and order card types!
Discard the top card of your deck and perform all of the following depending on the card type of that card!
・If it's a normal unit, look at the top five cards of your deck and call up to two of them!
・If it's a trigger unit, all of your front row units get +5000 Power and this unit gets Critical +1!
・If it's an order card, gain an Imaginary Gift:Accel!
By locking "Leo-Pald", you'll be able to increase your circles and allies and power up your field! 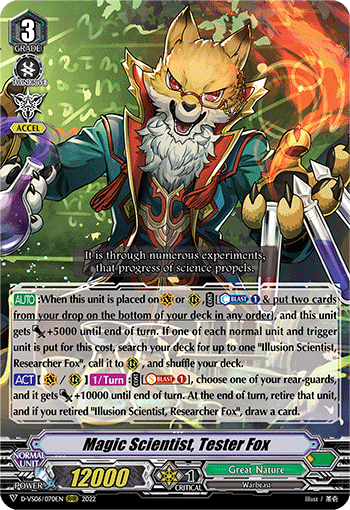 Magic Scientist, Tester Fox
When placed, Counter-Blast 1, put two cards from your drop onto the bottom of your deck and this unit gets +5000 Power! If a normal unit and a trigger unit were put to the bottom of the deck with this effect, call up to one "Illusion Scientist, Researcher Fox" from your deck!
Soul-Blast 1 and one of your rear-guards get +10000 Power, and at the end of the turn, retire that unit and if the retired unit was "Illusion Scientist, Researcher Fox", draw a card!
Call the corresponding unit from your deck and in exchange for retiring it, you'll be able to increase the power of that ally!
As you'll be returning a trigger unit back to the deck, you'll also be increasing your chances of revealing a trigger during drive check! 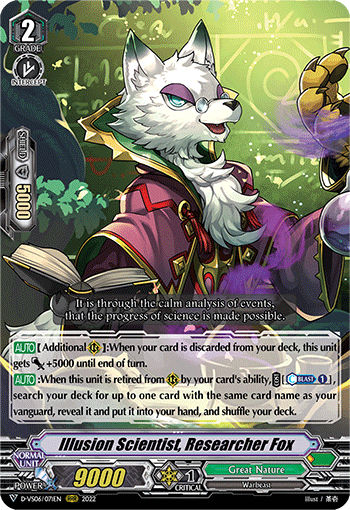 Illusion Scientist, Researcher Fox
When a card is discarded from your deck, this unit gets +5000 Power!
When this unit is retired by a card's ability, Counter-Blast 1 to put a card with the same card name as your vanguard from your deck to your hand!
Use this card together with cards that discard cards from your deck to aim for massive power ups!