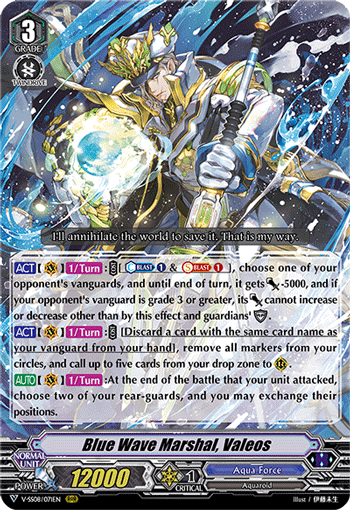 Blue Wave Marshal, Valeos
Your opponent's vanguard receives -5000 Power! In addition, its power will neither increase nor decrease during that turn! By discarding a card with the same card name as your vanguard from your hand, you can remove all markers from your circles and call five cards from the drop zone! Also, at the end of the battle your unit attacked, you can exchange the positions of two rear-guards! Fix the power of your opponent's vanguard, and let your rear-guards' attacks pass through! You can deploy a large number of units from the drop zone, so you can attack without losing momentum! 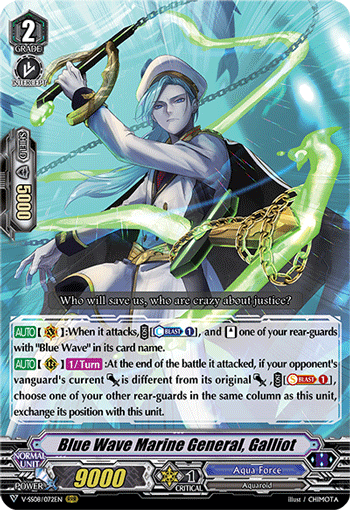 Blue Wave Marine General, Galliot
When it attacks, stand one of your "Blue Wave" rear-guards! Also, at the end of the battle it attacked, if your opponent's vanguard's current power is different from its original power, you can exchange its position with another rear-guard in the same column as this unit! Mess with your opponent by exchanging the position of this unit together with the ability of "Blue Wave Marshal, Valeos"! 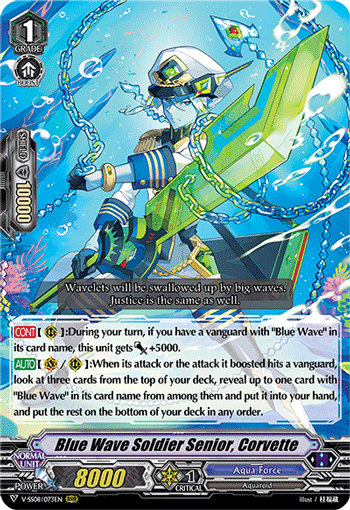 Blue Wave Soldier Senior, Corvette
If your vanguard is a "Blue Wave" unit, it gets +5000 Power! When its attack or the attack it boosted hits a vanguard, look at three cards from the top of your deck, and add a "Blue Wave" card to your hand! Let's start by increasing its power from the beginning!