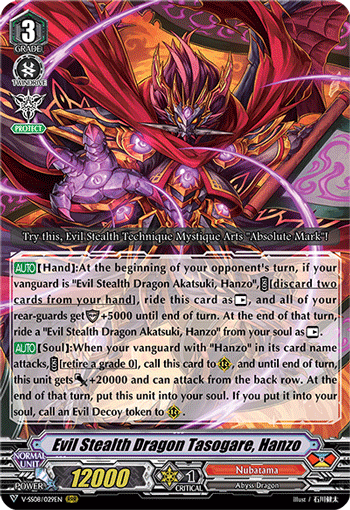 Evil Stealth Dragon Tasogare, Hanzo
At the beginning of your opponent's turn, discard two cards to ride this card, and all of your rear-guards get +5000 Shield! At the end of that turn, return to "Evil Stealth Dragon Akatsuki, Hanzo"! During your opponent's turn, change from "Akatsuki" to "Tasogare" to overcome the opponent's attack! Its other ability allows you to call this card from soul by retiring a grade 0 when your "Hanzo" vanguard attacks, and this unit gets +20000 Power! You can attack even from the back row! At the end of that turn, return this unit to soul and call an Evil Decoy token! You can temporarily "transform" the Evil Decoy token into a "Hanzo" alter ego! 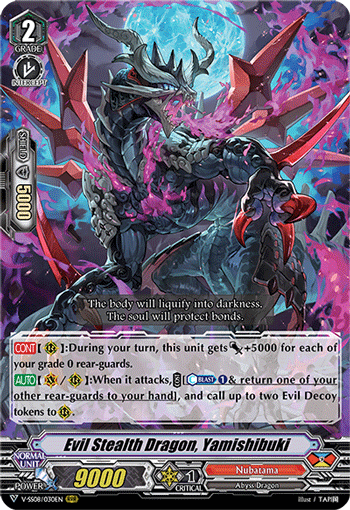 Evil Stealth Dragon, Yamishibuki
For each grade 0 rearguards, this unit gets +5000 Power! When it attacks, return one other rear-guard to your hand to call up to two Evil Decoy tokens! It is a unit that balances offense and defense, allowing you to increase your own power while increasing the number of Evil Decoy tokens! 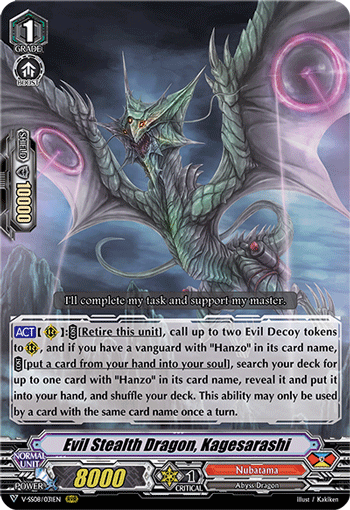