New Ride Lines alongside new support units to look forward to this December!

The much-awaited third Booster Pack for the CARDFIGHT!! VANGUARD overDress series is coming to stores on December 10th!

Advance of Intertwined Stars is the third Booster Pack for CARDFIGHT!! VANGUARD overDress. Other than support for existing Ride Lines, we have new Ride Lines introduced too, bringing forth more new possibilities and variations to cardfights!

First up, let’s check out the new Ride Lines that you’ll find in this product!

A Greedon deck summarised in five words: Endurance is key to success!

The party starts after the first Persona Ride; Greedon’s ability defies the regular loss condition of having six cards in your damage zone by making it seven instead, which means that you not enjoy a longer “lifespan” in your cardfight, you also are effectively denying your opponent from pulling off a 6th damage heal (if you have 6 damage)!

In addition, after Greedon attacks, you may restand it for another vanguard attack at the cost of putting four rear-guards into your soul! The longer the battle drags on with more cards in soul, Greedon gets more powerful too!

The units in the Gravidia Ride Line are based on aliens and a space dragon (Gravidia Nordlinger), and they are out to create their own utopia by annihilating opposing forces.

The playstyle of this deck involves a lot of Meteorites (up to 16 pieces in a deck), and the goal is to gather enough of them in your Order Zone while you finish off your opponent with the ultimate attack of “Gravidia Nordlinger”! If you’re a fan of re-enacting epic space-themed battles, this is a deck you definitely would want to pick up! 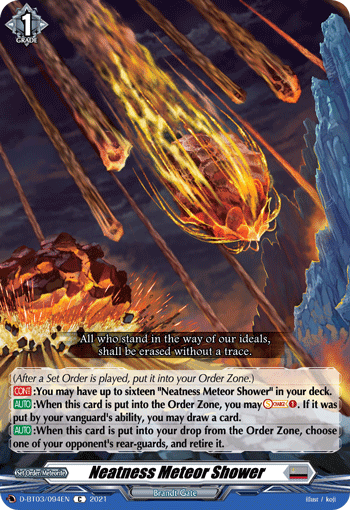 Neatness Meteor Shower
This Set Order/Meteorite is a must-have in any Gravidia deck (up to 16 pieces), as it allows you to Soul-Charge from the units’ overall high Soul-Blast consumption, and also allow you to increase your hand or retire the opponent’s rear-guards depending on the situation!

A Flagburg Dragon deck summarised in four words: The more (attacks) the merrier!

Players of the Aqua Force clan in the V Premium / Premium formats will find this Ride Deck’s mechanic rather familiar; fill up your field with allies, and the more attacks you pull off during the turn, the more advantage you have in battle!

Set up your field with allies like “Inroad Shooter” and “Ascendance Assault”; both of which can be called as rear-guards when rode upon! The real action starts once you have “Flagship Dragon, Flagburg Dragon” as your vanguard; make use of attacking and restanding multiple rear-guards to unlock more of its cool abilities, ranging from retiring opposing rear-guards and forcing your opponent to use up more resources to guard while itself gaining a power up!

Meanwhile, if you have decks from previous products, you definitely wouldn’t want to give this product a miss; here are some of our picks! 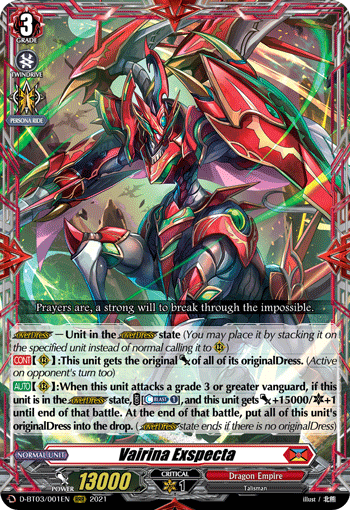 Vairina Exspecta is the latest addition to the line of Vairina units that Trickstar and Chakrabarthi Divine Dragon, Nirvana decks can use to boost their offensive capabilities. On attack of a grade 3 vanguard if in the [overDress] state, it piles on the pressure upon your opponent with a 15k power-up and an additional critical! 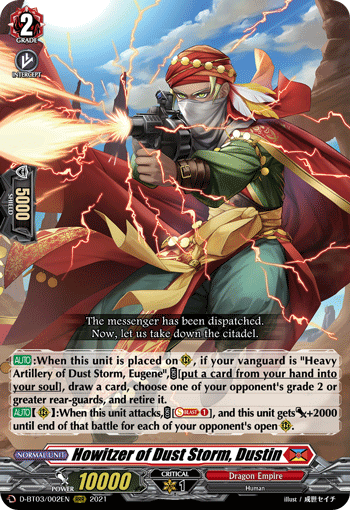 This is a must-have for your Eugene deck; when you have the latter as your vanguard, you can increase your hand size and retire your opponent’s grade 2 or greater rear-guard by paying a cost that can be beneficial to Eugene’s second ability too!

In addition, this unit gets +2000 Power for every of your opponent’s open rear-guard circle, so allies with retire abilities such as Strong Fortress Dragon, Gibrabrachio are good to have! 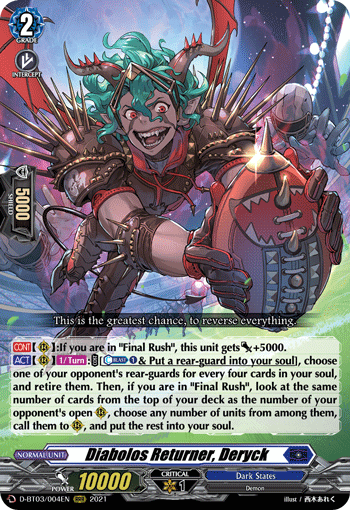 Diabolos Returner, Deryck
When it comes to displaying strength in numbers, Deryck takes it beyond just on field!

Its second ability’s cost and effects are good sources of fuel for Bruce’s ability, while allowing you to retire opposing rear-guards and replenish your field! Be sure to make use of allies like Diabolos Boys, Eden beforehand to free up more open circles to maximize Deryck’s potential!

In addition, this unit gets a power up as long as you are in “Final Rush”, easily making this unit a 15k attacker before any additional boosts! 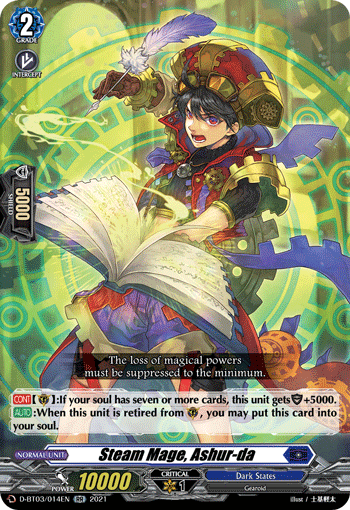 Steam Mage, Ashur-da
This unit will “Ashur” you that no resource goes to waste!

This card goes especially well in a Baromagnes deck, as the tendency to have seven cards in soul is higher, granting this unit +5000 Shield! After it has been used to guard against attacks, it goes to the soul rather than the drop, which helps in accumulating more cards in soul for Baromagnes’ ability! 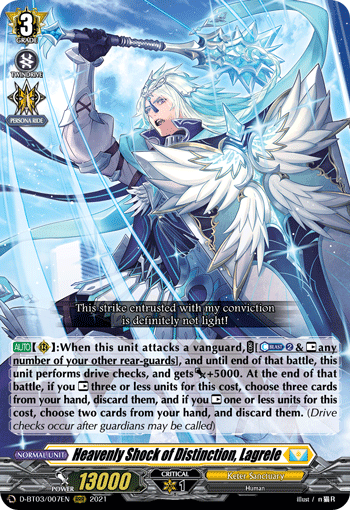 Heavenly Shock of Distinction, Lagrele
At first glance, Lagrele’s ability seems very peculiar, especially when it involves Counter-Blast 2 and resting your own rear-guards.

However, its potential is so much more than the cost involved! With a power up and gaining the ability to drive check once you pay the cost, this is the unit you definitely should restand with Bastion’s ability and push on for multiple oppressive attacks! 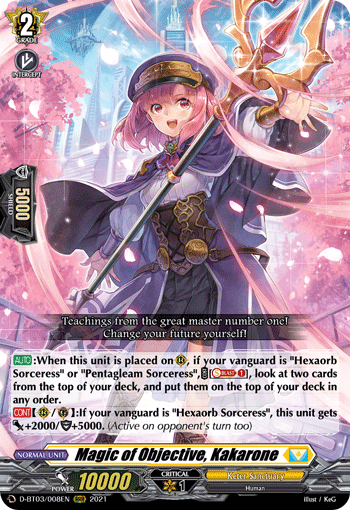 Magic of Objective, Kakarone
You can count on Kakarone’s magic to secure objectives!

When placed as a rear-guard, you can manipulate the top two cards of your deck, as long as you have Hexaorb Sorceress or Pentagleam Sorceress as your vanguard!

In addition, this unit gets +2000 Power and +5000 Shield regardless of turn, as long as you have Hexaorb Sorceress as your vanguard! 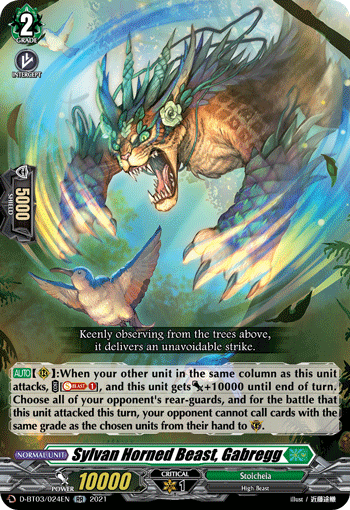 Sylvan Horned Beast, Gabregg
To attack or to protect, that is the question…but why not do both at the same time?

Gabregg not only looks intimidating, it is one not to be messed with in combat too! Having this on the field with other units in the same column allows it to be a solid 20k attacker, while with its nifty guard-restrict ability, your opponent gets penalized more if they have a greater variety of card grades on the field! 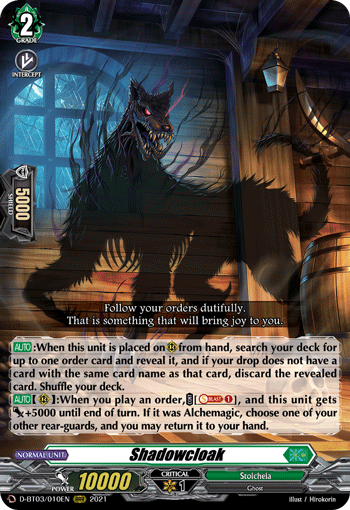 Its on-place ability allows you set up for Alchemagic easily, as you can search your deck for one order card, reveal it, and discard it if there is no duplicate card in the drop!

Meanwhile, if you play an order, Soul-Blast 1 and this unit gets +5000 Power! If you performed Alchemagic you can return one of your other rear-guards to hand too! 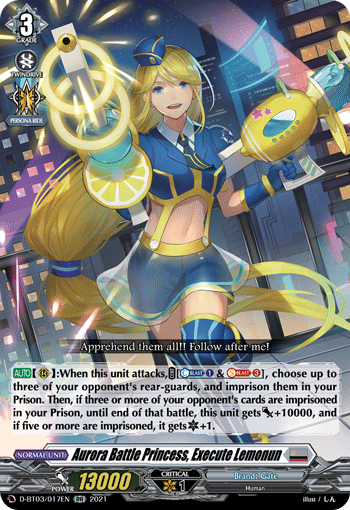 This unit is able to bring more than just a dose of Vitamin C to the offensive capabilities of a Seraph Snow deck!

Everything comes into place the moment this unit attacks; you get to imprison rear-guards of your opponent, while acquiring sweet additional benefits like a power-up and an extra critical, depending on the number of cards in your Prison! 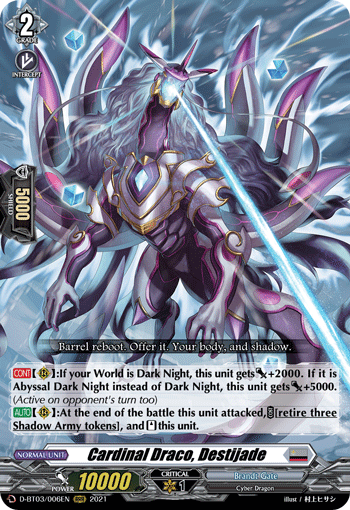 Cardinal Draco, Destijade
Behold, the dragon that thrives in the Dark Night!

If your World is Dark Night or Abyssal Dark Night, this unit gets a power up; +2000 for the former and +5000 for the latter which applies on your opponent’s turn too!

After your Shadow Army has attacked, you can retire three Shadow Army tokens and allow this unit to attack again!

Don’t miss out on the pre-order bonus too!
Each display will come with one set of double-sided Fighter’s Coins!
※While stocks last

Tournament store-exclusive booster release campaign!
In conjunction with the release of this product, tournament stores will receive PR packs that can be given out to customers (1 PR pack free with purchase of any 10 packs of English Edition Vanguard products)!
This PR pack contains 1 random card out of 14 types of cards.
※While stocks last

D-PR/041EN (hot-stamped Over Trigger “Let’s Vanguard! Yu-yu Kondo” as pictured below) will be included in very limited quantities too, with only 999 pieces available worldwide!