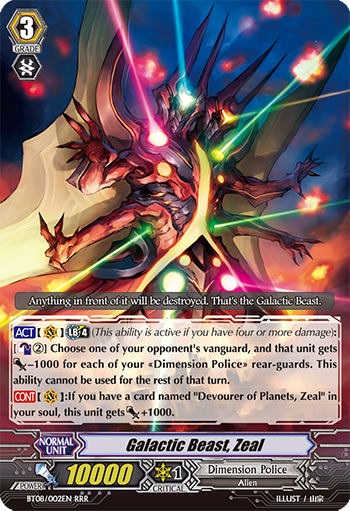 Galactic Beast, Zeal
Normal Unit
Dimension Police
Alien
Star Gate
Grade 3
Power 10000
Critical 1
Shield -
Twin Drive!!
-
[ACT](VC)[Limit-Break 4](This ability is active if you have four or more damage):[Counter-Blast 2] Choose one of your opponent's vanguard, and that unit gets [Power] -1000 for each of your &ltDimension Police> rear-guards until end of turn. This ability cannot be used for the rest of that turn.

[CONT](VC):If you have a card named "Devourer of Planets, Zeal" in your soul, this unit gets [Power] +1000.
Anything in front of it will be destroyed. That's the Galactic Beast.
G-Regulation
BT08/002EN
RRR
山宗
Prev
Return to Search Results
Next

[Galactic Beast, Zeal] is used in the follow Deck Recipes