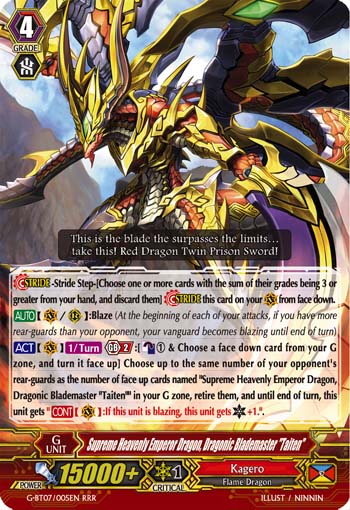 Supreme Heavenly Emperor Dragon, Dragonic Blademaster "Taiten"
G Unit
Kagero
Flame Dragon
Dragon Empire
Grade 4
Power 15000+
Critical 1
Shield -
Triple Drive!!!
-
[Stride]-Stride Step-[Choose one or more cards with the sum of their grades being 3 or greater from your hand, and discard them] [Stride] this card on your (VC) from face down.
[AUTO](VC/RC):Blaze (At the beginning of each of your attacks, if you have more rear-guards than your opponent, your vanguard becomes blazing until end of turn)
[ACT](VC)[1/turn][Generation Break 2]:[Counter-Blast 1 & Choose a face down card from your G zone, and turn it face up] Choose up to the same number of your opponent's rear-guards as the number of face up cards named "Supreme Heavenly Emperor Dragon, Dragonic Blademaster "Taiten"" in your G zone, retire them, and until end of turn, this unit gets "[CONT](VC):If this unit is blazing, this unit gets [Critical] +1.".
This is the blade that surpasses the limits…take this! Red Dragon Twin Prison Sword!
G-Regulation
G-BT07/005EN
RRR
NINNIN
Prev
Next