A Gold Paladin deck that uses "Spectral Dupe Dragon "Яeverse"" as a trump card. Pair it together with "Spectral Duke Dragon" to greatly power up your vanguard and aim for three consecutive vanguard attacks! 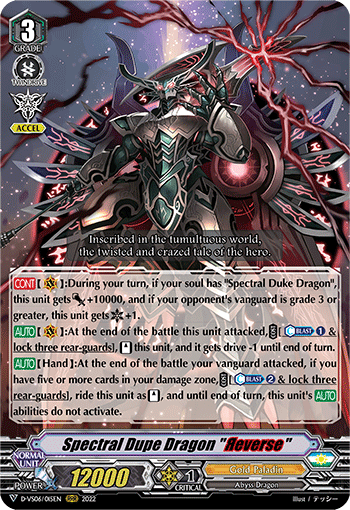 Spectral Dupe Dragon "Яeverse"
During your turn, if there is a "Spectral Duke Dragon" in your soul, it gets +10000 Power, and if your opponent's vanguard is grade 3 or greater, it also gets Critical +1!
At the end of the battle it attacked, Counter-Blast 1 and lock 3 of your ally rear-guards to stand this unit with drive -1!
While this card is in your hand, at the end of the battle that your vanguard attacked, if you have five or more cards in your damage zone, pay the cost and ride this card, and this unit's AUTO ability will not activate for this turn!
Although this unit is strong as is, when you're in a pinch, you'll also be able to aim for three vanguard attacks with this card! 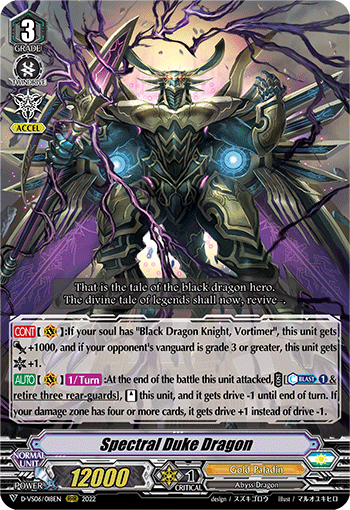 Spectral Duke Dragon
If you have "Black Dragon Knight, Vortimer" in your soul, this unit gets +1000 Power and if your opponent's vanguard is grade 3 or greater, it also gets Critical +1!
At the end of the battle it attacked, Counter-Blast 1 and retire three of your rear-guards to restand this unit with drive -1! If you have 4 or more cards in your damage zone, it gets drive +1 instead of drive -1!
A grade 3 that can be powered-up during both players' turns!
After using this unit's ability to restand, superior ride "Spectral Dupe Dragon "Яeverse"" to perform a total of three vanguard attacks and seven drive checks!