Hello to all the Vanguard fans around the world!
This is Keita Mori, the Vanguard project’s general producer.

The second booster for the new Nation Fight format, “A Brush with the Legends”, has been released in many countries and regions, and the first product featuring the sixth nation Lyrical Monasterio, was released in Japan in August. As the effects of the coronavirus infection can still be strongly felt in Japan and many other areas, we have not been able to offer large-scale events, but we hope that everyone has been able to enjoy Vanguard in their own environment and style. As I have outlined in the past, we will continue to develop new booster packs for Nation Fight format, aiming for about 4 products per year, so please continue to support us.

Since we started sending out the Producer Letters, we have been able to receive more feedback and requests than ever before, through DMs and replies on Twitter (@KSMori_VG), and through e-mails to our user support. And it’s not only from Fighters, but also from card stores, play groups and clubs, and sales partners around the world. As always, we appreciate all of your comments, and we read all of them and use them as reference for development and management of the game. I am sorry that I am not able to reply to each of you individually, but I would like to thank you all once again. Thank you very much.

We also use the results of various tournaments, marketing surveys, and questionnaires to make various decisions. We have been running more questionnaires than in the past, all of which have been very successful thanks to the help of the community.

In this issue of the Producer’s Letter, I will focus on two topics that have been the subject of many inquiries and opinions from both within Japan and overseas: our future policy on maintaining the Cardfight formats, and adjustments for the Premium format.

The TCG Strategy Presentation will be held on Tuesday, September 14th (Japan time), and will provide the latest information on new card game products, the new season of the “overDress” anime, and the new chapter of the “ZERO” application, so please look forward to that as well! We are also planning a presentation for the English edition in October!

In order to ensure that everyone continues to enjoy Cardfight!! Vanguard, we recognize the need to continue with developing and releasing products for the three major Cardfight formats, and maintaining their environment. For the sake of convenience, I will use the following abbreviations for the current major formats:
• Standard – Nation Fight: D
• V Premium – Clan Fight: V
• Premium – Clan Fight: P

Our policies on the maintenance of the Cardfight environment for the future are as follows:

And we plan to implement the following regular cycle for the maintenance of the Cardfight environment:

※These announcements will be first made in the Vanguard Weekly Bites program (delivered in Japanese), with the translated information being shared globally alongside the program

In line with the above policy, we will make an announcement of the regular update to the Fighter’s Rules in late September 2021, as part of the maintenance of the three major formats (D/V/P).

Our perception of the play environment, at the time of writing this letter (end of August 2021), is summarized below.

All over the world, various appealing card games (both analog and digital) are working hard in their own way to maintain their environments to be fun to play. Cardfight!! Vanguard is also looking to maintain the playing environment based on various measures such as compensating for extreme deviations in game speed, enjoyment, and win rate, correction of errors, and so on.

Next, we will touch on the maintenance of Clan Fight Premium format, which we have found to have “a number of major issues” in its current playing environment.

Let me start with the conclusion: we will be making some major changes (in comparison to previous years) regarding the Premium environment with the announcement in late September 2021 (implemented from October 1st).

*As this will be the first of our regular announcements, there is a large amount of information to be covered, so the presentation will only cover the general points this time, with the details posted on the official website.

In Premium, which has the appeal of being a “long-lived” and “complex” environment, there are often cases where the synergy between certain combinations of cards from different release periods are too powerful, or even create infinite loops and other potentially game-breaking effects. Our decision to take major action is not simply in response to the heated community debate, but because the issues have been clearly identified from various data. Of course, we will continue to keep a close eye on how these changes affect the environment, and we will consider additional restrictions and balances as necessary.

While I am certain that there will be a lot of discussion when we make the announcement in late September, all of us involved in the project sincerely hope that everyone will enjoy the new environment.

In September 2021, V Clan Collection Vol. 1 and Vol. 2 will be released for the Japanese edition in the first half of the month (September 3rd), and Revival Selection will be released in English in the second half of the month (September 24th). These are all new products for your enjoyment of Clan Fights (both V and P), and each has different implications for the Premium format. 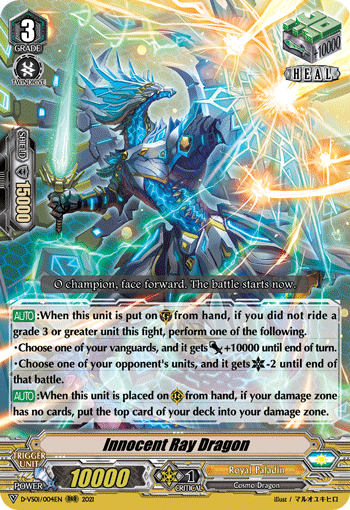 The former is a product that’s meant as support for V Premium, but it also contains a new type of card called “Heal Guardian” that will have an impact on Premium as well. The latter will contain many cards from previous sets to support this “long-lived and complex” environment. We believe that it is important to both develop new cards and provide reprints of old cards moving forward.

As previously announced, we are also developing a “product meant as support for Premium that contains completely new cards” that will be released in 2022 (in both Japanese and English). We are also considering how we can provide for our Japanese-edition fighters reprinted cards for the Premium format, similar to the English-edition “Revival Selection”, so please look forward to seeing how this product will turn out!

How was the third issue of the Producer’s Letter?

I may have focused heavily on discussing the play environment this time, but I look forward to exploring other topics of interest to Vanguard fans in future issues.

Once again, don’t forget to check out the TCG Strategy Presentation coming up on Tuesday, September 14 (Japan time) for the latest information! And we are also planning a presentation for the English edition in October!