V Clan Collection Vol.2, together with V Clan Collection Vol.1, is part of the Special Series featuring a wide range of brand new support alongside nifty reprints for all clans (each product carries 12 clans respectively), and these cards can be used in both V Premium and Premium formats! On top of that, a new type of Heal trigger, known as the Heal Guardians, makes its debut in these products to bring up your decks’ defensive capabilities up a notch!

Let’s check out some of the featured cards below! 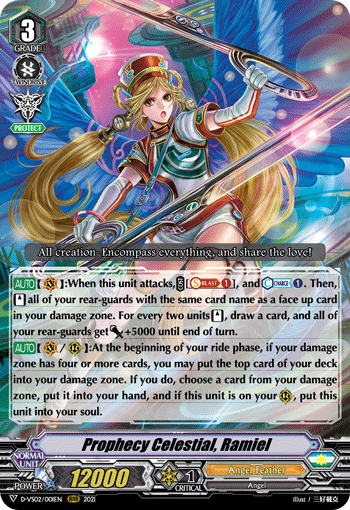 Prophecy Celestial, Ramiel
Set up your field and let Ramiel’s prophecies guide you to victory!

At the beginning of your ride phase, if you are at four damage or more, you may switch up the cards in your damage zone with the top card of your deck, and add one card from the damage zone to hand (cue free Counter-Charge)!

Its on-attack ability not only grants you a Counter-Charge, but also restand all rear-guards of the same name as a face up card in the damage zone, so be sure to set up a copy of your desired units in the damage zone with with the remaining copies on the field, and aim to restand them all! 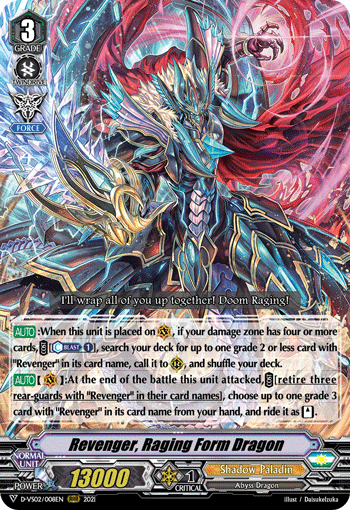 If you have four or more damage, you may call a grade 2 or lower “Revenger” unit to the field! Call cards such as Barrier Troop Revenger, Dorint, or Dark Armor Revenger, Rinnal (available in the same product) to set your field up for an added advantage!

Even after it attacks, the battle is not over yet, as you may choose up to one grade 3 “Revenger” unit to ride over as Stand for another 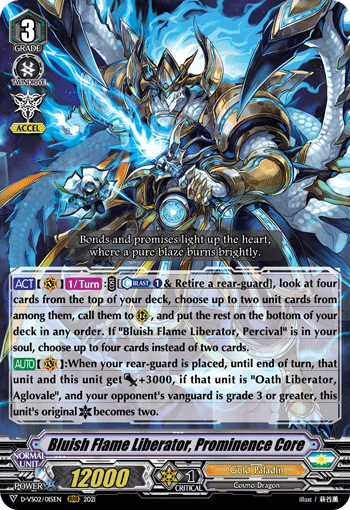 If you have Bluish Flame Liberator, Percival in your soul, you can superior call up to four unit cards instead of just two by paying the cost!

In addition, if you call an Oath Liberator, Aglovale rear-guard, both units get +3k Power, and Prominence Glare itself attacks with 2 criticals until the end of turn! 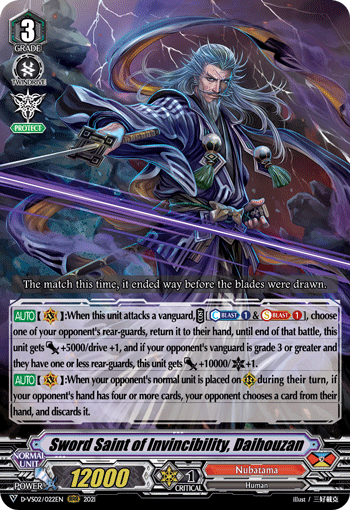 Sword Saint of Invincibility, Daihouzan
Whittle down your enemy forces and resources, and go for the finishing blow!

In addition, if your opponent calls a normal unit to field during their turn, you can force them to discard a card from their hand! 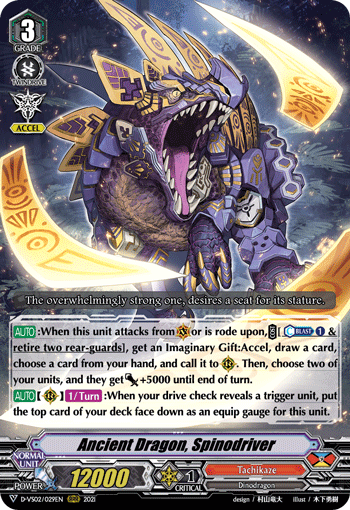 Ancient Dragon, Spinodriver
Never underestimate the tenacious Dinodragons when it comes to battling on the frontlines!

When it attacks as a vanguard or is rode upon, you can get an Imaginary Gift:Accel, and grant a 5k power up to two rear-guards of your choice at the cost of retiring two rear-guards! If you used units like Regiment Dragon, Regiodon and Full Speed Dragon, Bluesprint for this cost, you can easily superior call additional units with their respective abilities and go for more attacks!

To top it off, Spinodriver’s power gain intensifies when you drive check a trigger unit, as you not only get to resolve the trigger effects, but also secure an equip gauge for it! 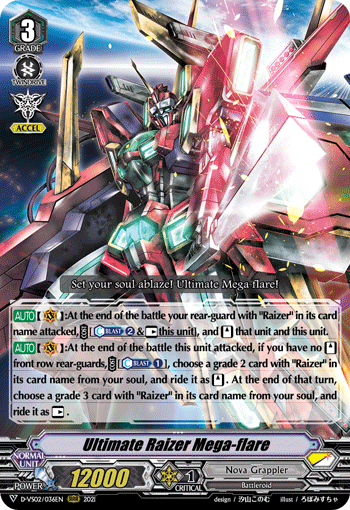 Ultimate Raizer Mega-flare
“Raizer” and shine for the battlefield!

The Raizers are all about rising (restanding) again after they are rested; at the end of the battle your Raizer rear-guard attacked, you pay 2 Counter-Blasts to restand it!

Meanwhile, at the end of the battle this unit attacked as a vanguard, if your entire front row has rested, you can temporarily ride a grade 2 Raizer to attack, before reverting to a grade 3 Raizer vanguard of your choice from your soul! 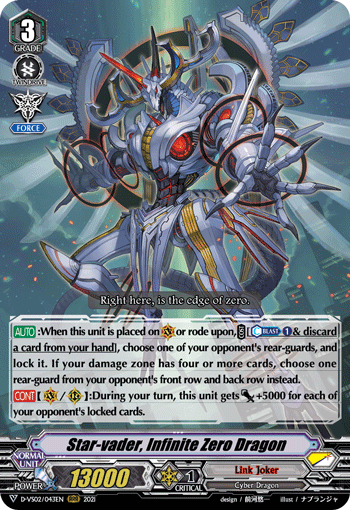 Star-vader, Infinite Zero Dragon
Zero in on your opponent, while unlocking your own potential!

When placed as a vanguard or rode upon, you pay the cost and lock your opponent’s rear-guard! If you are at four or more damage, double that by locking one rear-guard each from the front and back row respectively!

The more opposing rear-guards you lock, the stronger you get, as it gets 5k Power for each! 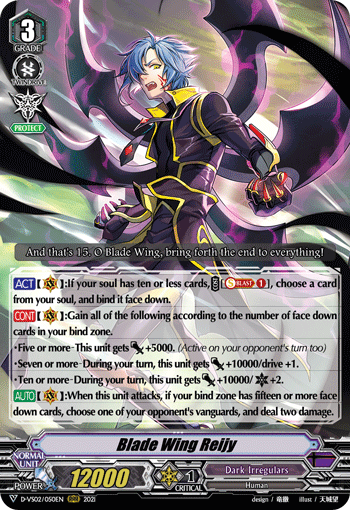 Blade Wing Reijy
Are you “Reijy” to offer your soul for immense power?

Granted, having too many cards in the bind zone will not benefit you if your opponent decides to deploy stall tactics, so be sure to use its second ability when you have enough bound cards to end the battle quickly! 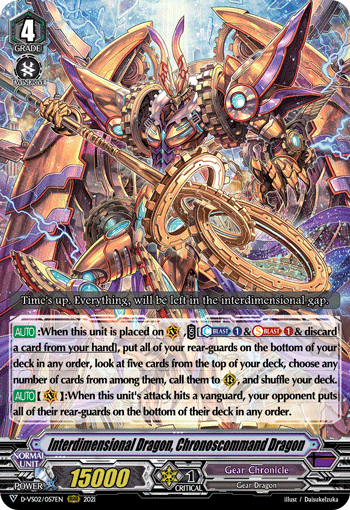 Set up this unit with the ability of Chronojet Dragon and go for another round of attacks! 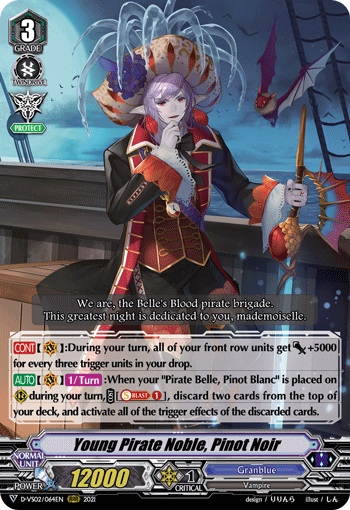 Young Pirate Noble, Pinot Noir
When it comes to dropping in on parties, you have to bring some Pinot Noir!

The more trigger cards you have in your drop, the stronger your front row becomes (5k Power for every trigger)! In addition, if you also have a “Pirate belle, Pinot Blanc” rear-guard placed during your turn, you can activate the effects of up to two trigger cards from the top of your deck! 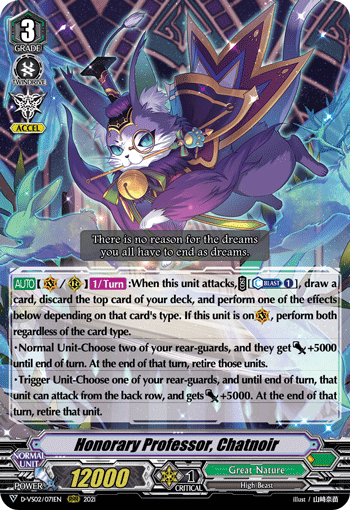 Honorary Professor, Chatnoir
When in doubt, just go for both!

Chatnoir’s ability is dependent on “luck of the draw”, granting different effects based on the card type. Of course, this will never become an issue if activated as a vanguard, or have Sage-saint Mentor of Black Lacquer, Isabelle use its vanguard ability!

Use those abilities wisely to greatly strengthen your allies! 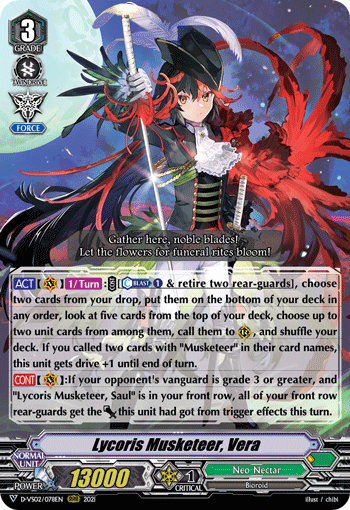 Lycoris Musketeer, Vera
You definitely should run as many Musketeer units as you can in this deck, so that you have a high chance of calling them as rear-guards, while granting an additional drive to Vera with the latter’s first ability!

“Lycoris Musketeer, Saul” is also a must-have in the field when you work your magic, as all trigger effects from Vera’s drive checks can apply to the entire front row rather than just the unit itself!

Don’t forget to check out the high rarity cards in this set too! 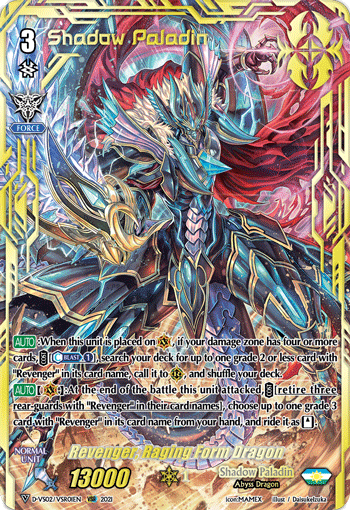 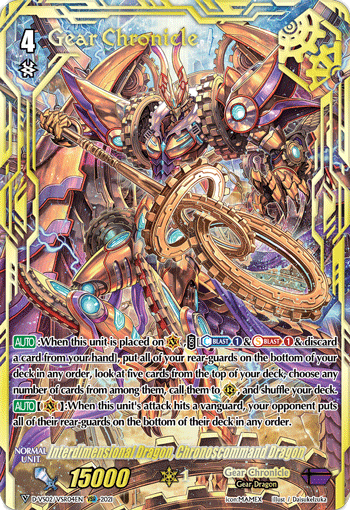 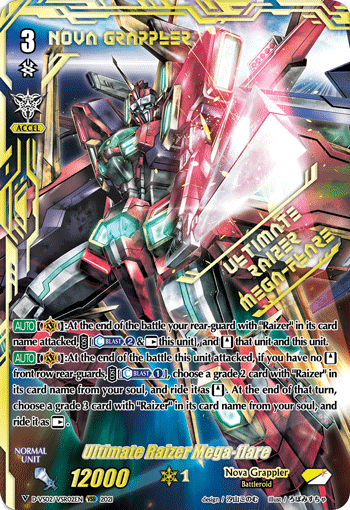 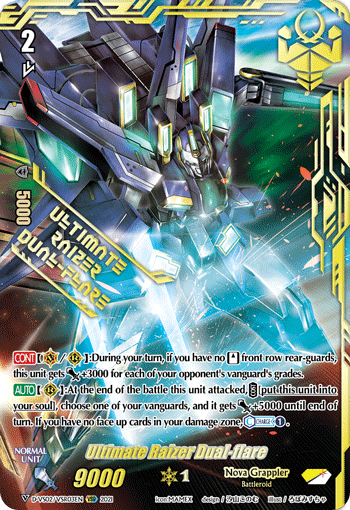