So what is Relay Fight, exactly?

As the name suggests, Relay Fight is a 3-on-3 game format played in the “relay” style. In order to have a Relay Fight, you need form a team of 3 Fighters with your friends, and you will play against other 3-player teams. Each team member is assigned a position: 1st Fighter, 2nd Fighter and 3rd Fighter, also known as the Vanguard, Centerfield and Captain respectively. Within a team, all members must use a clan different from the other members; for example, the 1st Fighter can use Royal Paladin, the 2nd Fighter can use Neo Nectar and the 3rd Fighter can use Gear Chronicle (refer to the picture on the right). Having 2 of the same clan in your team is a no-go! 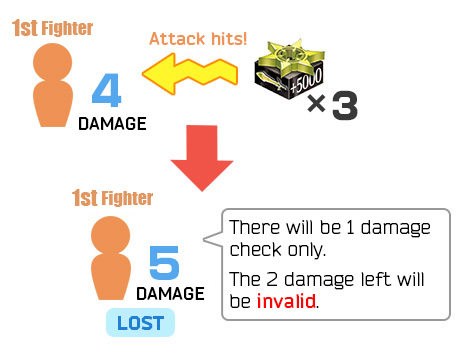 But what happens if I’m the 1st Player at 4 damage, and my opponent hits me with 2 critical? you ask. In Relay Fight, should a situation like that occur, you will take 1 damage, bringing you to a total of 5, and the rest of the damage will be cancelled. All remaining damage checks will not be performed.

In addition, when a fighter loses, the attacking side’s turn ends as well. All abilities that trigger “when attack hits”, “at the end of the battle”, “at the beginning of the end phase of that turn” will all still trigger and resolve, though!

】:When this unit’s attack hits a vanguard, choose one of your opponent’s rear-guards, and retire it.

For example, When “Divine Dragon Knight, Mahmud” hits the opponent’s vanguard and results in 5 damage for opposing 1st Fighter, the card’s ability (to retire an opponent’s rear-guard) still resolves before the turn ends.

Transitioning to the Next Fighter

The following cards will be retrieved by the owner:

The following cards will remain on the field:

These cards remaining on the field are still eligible for use in paying costs for effects.

After transition, the next Fighter will place his/her own deck, and draw X+3 cards from the top of their deck, where X is the number of cards in the previous Fighter’s hand before they lost. For example, if the 1st Fighter has 4 cards in hand when he loses, the 2nd Fighter will draw 7 cards from their deck when they take over. 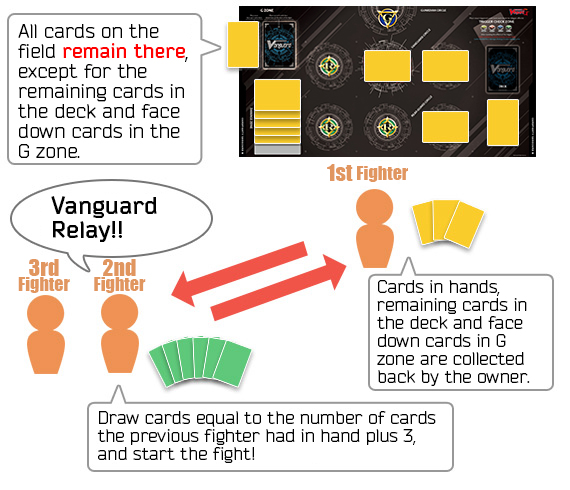 What happens when I am at 5 damage, and I have to heal 1 damage? you ask. You will remain as the active Fighter, and continue the Relay Fight as per normal! The previous Fighter does not take over the game from you if that happens.

In addition to above-mentioned rules, there are also some special rules for Relay Fight:

As the 2nd and 3rd Fighters continue the game from the previous Fighter, they will already have a vanguard on the field. Their first vanguard cards should therefore be shuffled into their decks.

As there will be a mixture of clans on the field, the restrictions of the “Lord” ability do not apply to the 3 clans in a team. All other restrictions, such as requiring a card of a specific clan, race, or card name, still apply as per normal.

Cards Belong to the Owner

Do note that you cannot search for cards from other members’ decks either! Additional victory conditions, such as those of Star-vader, “Omega” Glendios and Original Deletor, Egorg, can also still be used as per normal.

If any Fighter runs out of cards of cards in the deck, the same thing happens! The team whose player decks out transitions to the next Fighter.

Hope you can enjoy this new way of playing Cardfight!! Vanguard! If you have any questions on Relay Fight, please feel free to contact our support team at sg_support@bushiroad.com. Do note that the Relay Fight will NOT be the tournament format for upcoming Bushiroad Spring Fest.