It is a few days after the assault on Ryuzu’s lab. Drawn by the shocking scene he had personally seen at the Lab, Chrono meets a mysterious youth with a Gear Chronicle deck under the cherry blossom trees.

With the increase of the G zone to 16 cards imminent, the game is set to change in many crazy ways. Players have greater freedom and flexibility in selecting G units for their decks, and the advent of the G guardians is sure to stir up quite a storm. Today, we’ll be giving you guys a preview of some of the new kids on the block that will be debuting very soon in the new Fighters Collection set and talking a little bit about how we can go about expanding our G zone with the increased deck size!

G Guardians – The Defenders of Tomorrow

G guardians are a new type of unit that gives players improved defensive capabilities. Off the bat, it provides 15000 shield, 5000 more than your trigger units, and can be called to the guardian circle by discarding a Heal trigger, which provides 10000 shield. In addition, after the battle that it was used as a guardian, it is returned to the G zone, which helps players fulfil Generation Break abilities at a far faster rate.

There are two key features about G guardians that we should keep in mind when using them:

G guardians can also be flipped face down by effect, from cards such as Thunderbolt Shockwave Colossus or Wakey Wakey Worker.

G guardians can also have great synergistic uses which can help players further their game-winning plans! Let’s take a quick look at some of these G guardians and what they have to offer your deck. 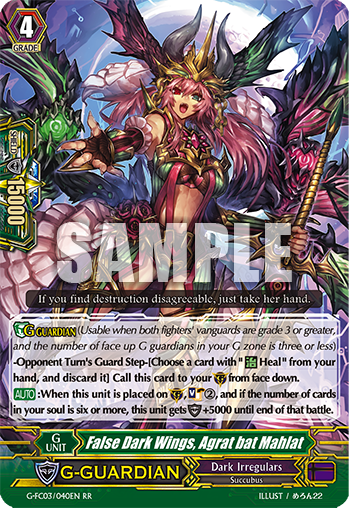 This card will help you accelerate the speed at which you build cards in the soul, and is definitely welcome in any Dark Irregular deck. The bonus +5000 shield is pretty much guaranteed, so you’ll always get more bang for your buck when you G guard! 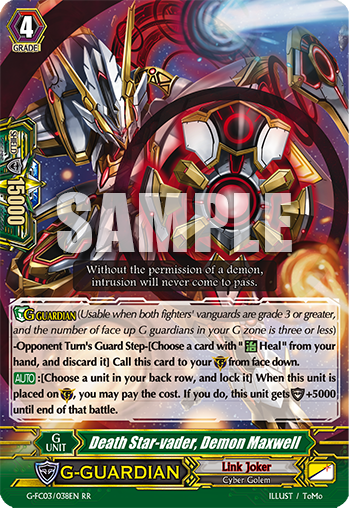 This card’s effect allows the player to lock a unit in their back row to gain a bonus +5000 shield. It may seem hefty, especially against decks that are able to retire your rear-guards, but this will help out decks that mainly play Alter Ego Messiah and Genesis Dragon, Amnesty Messiah. 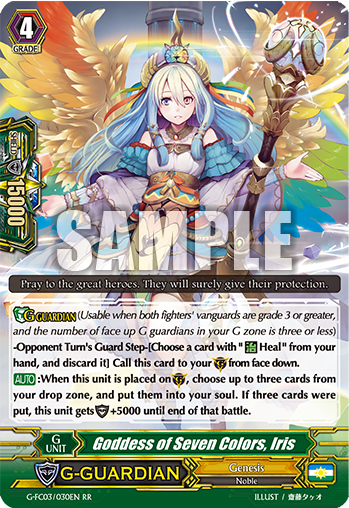 Another beneficial soul-based ability, Goddess of Seven Colors, Iris allows the player to put 3 cards from the drop zone to the soul. While Dark Irregulars cards usually only require a certain number of cards in the soul, Genesis cards often use soul as a resource, so being able to re-charge the soul without taking cards out of the deck is definitely welcome.

On average, you’d want to play around 3-4 G guardians in your deck – one for each Heal trigger (assuming you run 4 Heal triggers). This still allows for 12-13 slots for G units! It may seem overwhelming or daunting, but it actually allows for greater selection and customization! Cards that you previously had to cut out due to size restrictions can be reconsidered for the deck now. Here’s a sample list that I’ve created for my <<Neo Nectar>> deck!

* Cards with names in italic are from G Fighters Collection 2016.

<<Neo Nectar>> decks often find themselves with a field that does not have a unit on the field that they want to duplicate when they Stride, so that’s where Flower Princess of Perpetual Summer, Verano comes in! You get to call up to 2 units to the field from your hand, then duplicate one of them directly with Flower Princess of Perpetual Summer, Verano, and duplicate the other one with Ranunculus Flower Maiden, Ahsha’s effect! In situations where your field gets retired due to your opponent’s effect, the second copy will allow you to fill up your entire field again for a very reasonable cost!

In Ahsha based decks, Dream-spinning Ranunculus, Ahsha and Ranunculus in Glorious Bloom, Ahsha are both essentials. Flower Princess of Spring’s Beginning, Primavera is also a perfect way to create massive columns when used in conjunction with cards like Greenshot Elf, Pure Maiden, Katrina and Ideal Maiden, Thuria, so you definitely want to include it in your G deck.

Air Element, Sebreeze is, of course, a great card to have to get your Generation Break 1 effects active if your opponent remains at grade 2, so it would be wise to run just 1 copy.

Finally, the G guardians! Sacred Tree Dragon, Rain Breath Dragon is a great way to set up your field for the next turn (so you can duplicate it with Ranunculus Flower Maiden, Ahsha’s effect!) and also gain 5000 shield while you’re at it. You’ll also want slightly more defensive power, so Metal Element, Scryew is there to deal with high-power enemy attacks. Dark Element, Dizmel prevents similar attacks on key rear-guards, and even protects those rear-guards when they are used as guardians!

Of course, this recipe is still tentative, but I’m definitely looking forward to modifying it and exploring more options! The new ruling has opened up a whole new world for many clans, and we hope to see much experimentation among players at future tournaments!