The Flaming Roar That Disrupts Order 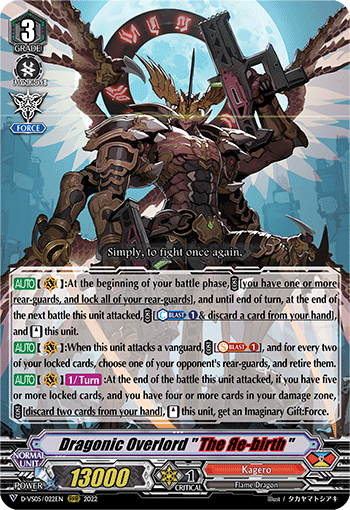 Dragonic Overlord "The Яe-birth"
At the start of your battle phase, if you have one or more rear-guards, lock all of your rear-guards, and at the end of the next battle that that this card attacked, Counter-Blast 1 and discard a card from your hand to restand this unit!
When attacking, Soul-Blast 1 and retire one of your opponent's rear-guard for every two of your locked cards!
At the end of the battle it attacked, if you have five or more locked cards and there are four or more cards in your damage zone, discard two cards from your hand to stand this card and gain an Imaginary Gift:Force!
In exchange for locking all of your allies, this unit enables you to attack three times consecutively with your vanguard!
Put multiple Force Markers on your vanguard circle and deal massive damage to your opponent with six drive checks!