The Evil Emperor who Pursues Supremacy

A Megacolony deck that focuses on decreasing your opponent's forces by forcing them to call cards from their hand. Gather grade 3 "Giraffa" cards into your soul and aim for multiple vanguard attacks!

Evil Armor Sovereign, Inverse Giraffa "Яeverse"
When this unit attacks a vanguard, you can make your opponent call cards from their hand as rested rear-guards! If the number of cards called is less than the number of grade 3 "Giraffa" cards in your soul, you can restand this unit by locking one of your rear-guards!
If your opponent's rear-guard is placed during your turn, by locking one of your rear-guards, all of your front row allies get +15000 Power!
Force your opponent to choose between offering their allies or allowing "Giraffa "Яeverse"" to attack twice! 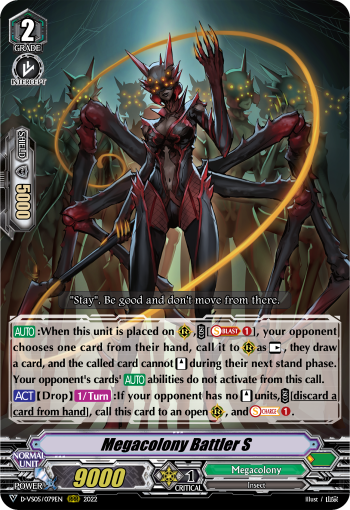 Megacolony Battler S
When placed, Soul-Blast 1 to have your opponent call a card as rest and draw a card!
While this card is in your drop, if your opponent does not have any standing units, discard a card to call this card and Soul-Charge 1!
By forcing your opponent to call cards from their hand, it'll be easier to use the ability of "Giraffa "Яeverse""!