NEXT Episode This Weekend!

Chrono and Shion have formed their teams, and engage in an exchange match at the Dragon Empire Branch!

The new Gear Chronicle units featured in these upcoming sets will further enhance your current playstyle for Gear Chronicle, as well as welcoming new units to the Gear Chronicle family, that is Zodiac Time Beast. Let’s look at some insights on what is installed for you. 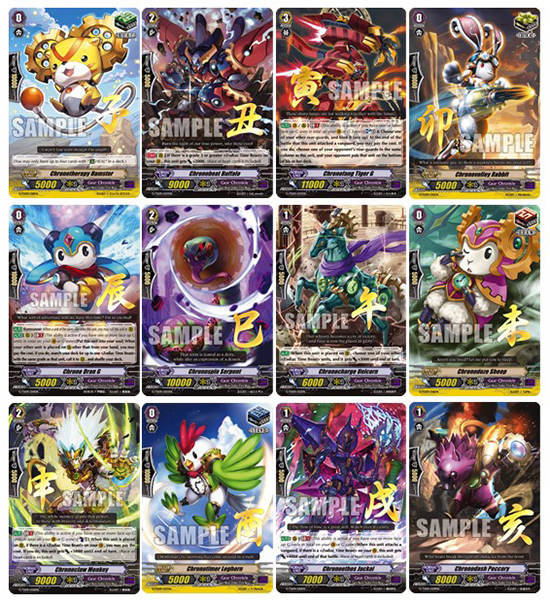 <Zodiac Time Beast> are new units which can unleash their hidden strengths to the player that uses them based on what <Gear Chronicle> deck build it is more focused on. We will be showing two different paths on how the power of these <Zodiac Time Beast> can lead you to victory!

Time Leap into the Future! 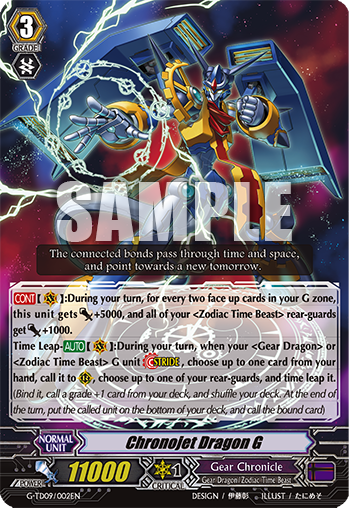 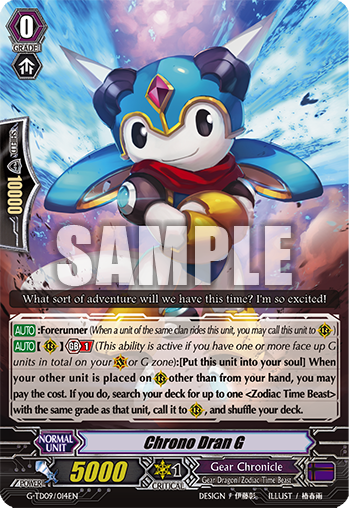 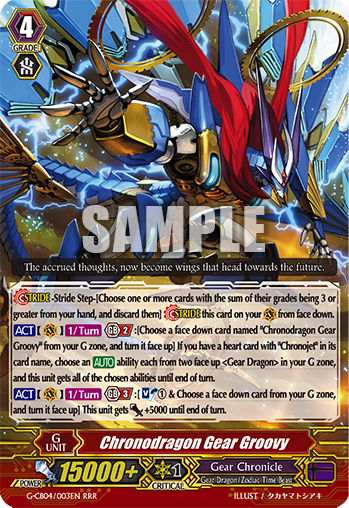 In case you have forgotten what Time Leap is all about, it is an ability given to some of the new Gear Chronicle units that allows the player to send one of his own units from the field to the bind zone in order to superior call a unit from the deck that is 1 grade higher than the bound unit.

Chronojet Dragon G is a brand-new unit which is the new evolution of Chronojet Dragon. When you perform Stride with a <Gear Dragon> or <Zodiac Time Beast>, you can call a rear-guard from your hand and Time Leap one of your rear-guard. This ability allows you to Time Leap a unit on your field to a unit of a grade you need. Its Generation Break 2 ability can come in handy as well in an event you cannot perform Stride, as it can probably provide additional power to all your Zodiac Time Beast Rear-guards, as well as itself. Another unit to link up with this ability is Chrono Dran G as it allows you to call another unit of the same Grade as the unit called from Chronojet Dragon G’s ability. You will have a field of your desired units in no time.

Chronodragon Gear Groovy can get one [AUTO] abilities each from two <Gear Dragon> face-up cards in your G Zone. There is a variety of G Units with good [AUTO] abilities to choose from such as Interdimensional Dragon, Ragnaclock Dragon and Chronodragon Nextage, and you can combine the abilities of two chosen cards into one. The other ability of Chronodragon Gear Groovy can provide additional Power to itself for a stronger attacking power. With more support for Gear Chronicle coming your way, this card is definitely a must-add to any Gear Chronicle deck that make use of Chronojet Dragon.

Delayed Blazer Dragon allows you to perform a Time Leap for free when you have a Grade 4 Chronojet Vanguard. Also, its Time Leap ability can benefit itself as it can provide it with an additional power of 2000 whenever a unit is placed from the deck to the rear-guard circle due to Time Leap.

Interdimensional Dragon, Heteroround Dragon can scramble your opponent’s with its ability. It can return one of your opponent’s rear-guard back to the deck and shuffle it. Then your opponent must call the top card of his/her deck to a rear-guard circle. This can not only potentially block one attack, but also call a unit that might not favour your opponent.

Steam Maiden, Mesh-kia is an interesting option to have for your deck. When it appears to the rear-guard circle from your Deck through Time Leap ability, you can [Rest] her to draw a card, as well as providing one of your other units additional [Power] +4000.

When Causality Dragon placed on the rear-guard circle, it can choose one of your units and give it [Power] +2000 and ability to Time Leap unit if it hits a Vanguard. You can give this ability to any unit which have high power to provide pressure to your opponent!

That summarize and concludes this week’s article preview on G Trial Deck 9: True Zodiac Time Beasts and G Clan Booster 4: Gear of Fate. We hope that you have a better idea on what cards you can put and upgrade for your <<Gear Chronicle>> deck. Until next time! 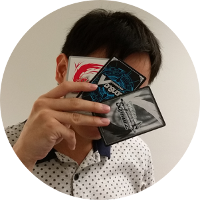