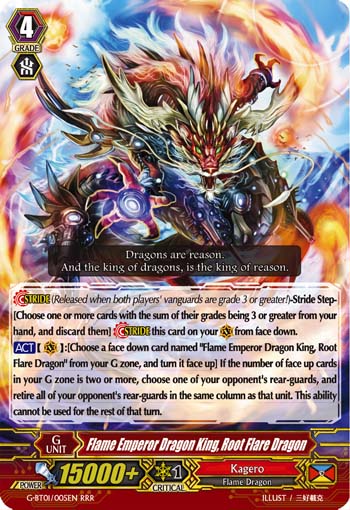 Flame Emperor Dragon King, Root Flare Dragon
G Unit
Kagero
Flame Dragon
Dragon Empire
Grade 4
Power 15000+
Critical 1
Shield -
Triple Drive!!!
-
[Stride](Released when both players' vanguards are grade 3 or greater!)-Stride Step-[Choose one or more cards with the sum of their grades being 3 or greater from your hand, and discard them] [Stride] this card on your (VC) from face down.
[ACT](VC):[Choose a face down card named "Flame Emperor Dragon King, Root Flare Dragon" from your G zone, and turn it face up] If the number of face up cards in your G zone is two or more, choose one of your opponent's rear-guards, and retire all of your opponent's rear-guards in the same column as that unit. This ability cannot be used for the rest of that turn.
Dragons are reason. And the king of dragons, is the king of reason.
G-Regulation
G-BT01/005EN
RRR
三好載克
Prev
Next